Over the Easter holidays, one of the things on my to-do list was to fill in a learning agreement for my future host Uni, Paris Diderot. On the form, I had to provisionally choose some modules for next year and today I think I have made my final choices!

Next year, I have to study 30 European Credits’ worth of modules per semester. At first, reading all of the module handbooks for Paris ‘Brochures à télécharger’ was pretty difficult to decipher as they were naturally all in French. I had to flick between a lot of different documents so that I could read about French, Spanish and cinema-based modules but if my understanding of what I have read in French is correct, I think I have signed up for:

-Latin (5 credits) This will be taught in French which seems pretty scary to learn a new language from scratch in one of my second languages. BUT I’ve always wanted to learn Latin as French and Spanish are based on it so I thought why not give it a try.

-Méthodes 1 (5 credits) This is a general French language module to help me brush up on French accuracy.

-Linguistique française- Syntaxe (5 credits) I’ll be learning all about word order in French and the importance of inversions. May not sound so interesting to you but I am a fierce grammarian and think this will be really useful!

-Grammaire du français (5 credits) Again, this is another intense French grammar module but I hope I will enjoy it as I find that side to language learning really interesting.

-Langue espagnole (6 credits) I want to keep my Spanish up while I’m in France so chose to have a Spanish language module!

And finally, Histoire du cinéma (4 credits) I thought I’d add some variety to my fairly grammatical future timetable and learn about French cinema.

So all that’s left for me to do now is to get my forms signed by uni and then send them away to Paris with a passport photo of me included. I’m really excited, all this form filling in has made going away to study feel very real. Just 4 months to go now! 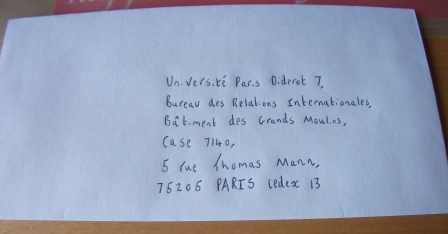 Letter envelope all ready to be sent!