Last weekend, I was lucky enough to do yet more travelling as I headed east to visit my friend from home, Terri, who is studying European Law with a Year Abroad in Valencia. I was really excited for the trip for 3 main reasons, 1. I was looking forward to seeing Terri and other familiar faces there 2. I was excited to visit Valencia for the first time and 3. I had heard a lot about Las Fallas, a festival celebrated in the city at the start of March so I wanted to see for myself what happens.

So, what are Las Fallas all about? First and foremost, they are about the Fallas which are huge, 10ft plus structures made from wood and decorated with papier-mâché. Many of the main streets in Valencia each have their own Falla proudly on display and these structures show many months of designing, planning and decorating. There is a competition annually within the city for the best Falla and this culminates in all but the winner structure being burnt. We watched a short video on the history of Las Fallas at the City of Arts and Sciences which interviewed several of the workmen who create the Fallas and for them, it is an experience that covers a spectrum of emotions; the stress of designing and erecting the work of art, the pride seeing it on display to the public, bittersweet tears of happiness and joy watching it get burnt down at the end of the festival and the excitement to do it all again next year when it’s over! Here are some pictures of Fallas that we saw during the weekend. 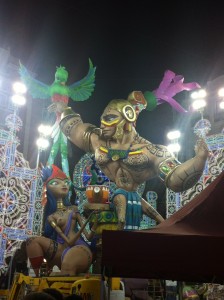 One of the Fallas 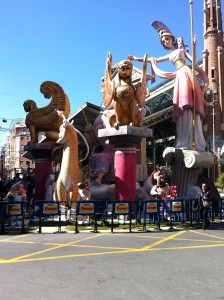 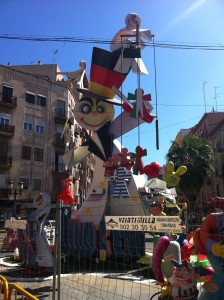 Falla with a political message

Gunpowder is also a massive part of Las Fallas. Firstly, there is La Mesclata which happens every day of the festival at 2pm and this is a fireworks display. Watching the Mesclata was a unique experience as I had never seen fireworks during daylight hours before and as-well as the visual aspect of fireworks, La Mesclata really is all about noise. Even from some distance from the epicentre of the display my whole body felt like it was shaking from the explosions and I could see panes of glass in the surrounding houses reverberating from the shock of the blasts! At night, there are also more fireworks and although I said in a previous post that I saw the best fireworks of my life during Nuit Blanche in Paris, these ones have stolen the crown as they were just incredible. The display was slightly tarnished however by the fact that a small piece of debris from the display fell into my right eye and for the second half, I was unable to see! There were first aid teams all around though and following the advice from some friendly Spaniards, I went to get it looked at and even went into an ambulance to have a proper eye-bath with saline solution. It was very kind of the volunteers to look after me in this way and although my eye was quite sore the next day, the pain eventually went away and I would definitely watch the show again, though perhaps with sunglasses next time!

I would say that the third part of Las Fallas is light. As-well as the beautiful fireworks lights I have already talked about, Valencia is also decorated with rows and rows of fairy lights during the celebration. Again, this was so beautiful and made the place feel really festive, the streets bustling with people wanting to see the lights, even young children out after midnight with their families looking at the displays. 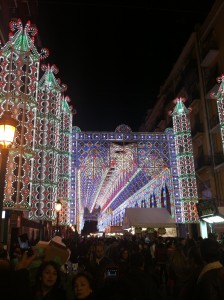 One weekend in Valencia was not enough to explore the whole city but I got a true feel for its biggest festival and I loved this experience as it is so unlike anything we would do at home in England. The whole city is part of this tradition, the skilled workmen who build the beautiful Falla statues, woman who dress up in traditional outfits to parade during the festival and children who enjoy all the fun and run around in the street setting off firecrackers! I would return to see Las Fallas again as it was magical. I am going to do some research to see what other festivals I may be able to visit during my time in Spain as if I had to name one thing that the Spanish do better than any other nation, it is put on a good fiesta! 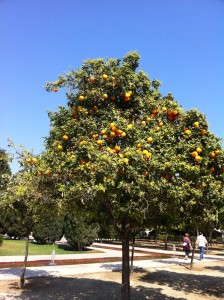 2 responses to “Valencia and Las Fallas”