Huelga- A word that is a big part of Spanish culture which in English means ‘strike’. Last week students at my university, the Complutense (and at others in Madrid) hacían huelga/went on strike on Wednesday and Thursday to protest again cuts to funding the education system.

A quote that I read online giving a Spanish student’s view on the strikes was “It makes me sad because they are not giving everyone the opportunity to study”. Unemployment rates were around 25% in Spain in 2012 according to the Instituto Nacional de Estadística (the official organisation in Spain that collects statistics about the country’s demography) and with university being a gateway to many careers, there is anger amongst students for whom going to university is now inaccessible.

Students barricaded roads and I also saw a small fire on campus made by protesters. Over-night, many buildings had been covered in graffiti such as in the picture below. 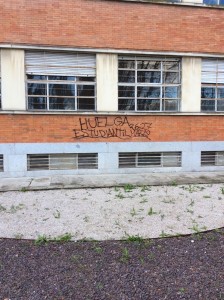 This act of protest wasn’t the first I have seen in Spain; there is rarely a week goes by without people gathering in Sol, the central square of Madrid to protest against something. Recently, there were mass protests against Coca Cola as due to the proposed closure of 4 bottling plants, which would affect around 1250 workers.

Although I have experienced strikes at the University of Leicester, they have not been like the strikes and protests I have witnessed here with masses of people, banners, graffiti and even fires and barricades. It is my opinion that it is the right of the people to make their opinion heard (through non-violent/destructive means) and I hope that these latest strikes bring positive change for Spanish students and workers. Have you ever seen a strike abroad/do you think there is a difference in-between strikes abroad and strikes that take place in the UK?