This past weekend was a very exciting one as I had my mum and sister, Katherine, to visit it me here in Madrid. The main reason for their visit (other than to see their beloved daughter/sister!) was because Katherine had signed up to run the Madrid marathon. Having already done 2 marathons in England, as soon as I knew where I was studying on my ERASMUS year, it was a priority for her to get booked onto a marathon in one of the two cities.

They arrived on Saturday afternoon and we went from the airport to the Marathon Expo. Here, Katie got her number and t-shirt and I think that was the moment it dawned on her that she actually had 26.2 miles to run the following day. We had a meal at a nice Italian restaurant so she could carb-load (pizza, pasta and bread- needless to say I carb-loaded too despite not running any marathon!) and then we came back home to try to get an early night. However as we hadn’t see each-other for a while, we ended up talking until late as I think nervous energy was also keeping Katie up.

My alarm went off what seemed like far too early on Sunday (7am) and I helped Katie making breakfast (oats and cornflakes for slow releasing energy) and we pinned her bib number on her t-shirt. Then it was time to walk to the starting line which was heaving with racers and spectators as there were 3 distances that people could run (10K, half-marathon and a full marathon) . After a few last encouraging words, she was off and even I felt nervous for her. Mum and I then grabbed a drink and made our way to the half-way point, located in Plaza de España to try and see her.

Katie told us she hoped to run the marathon in 4 and a half hours so we were at the half-way point 2 hours after the start of the race, thinking that she’d run past 2 hours and 15 mins after the start of the race. However, 11.15 went by, then 11.30, then 11.45 and then 12.00 and I was starting to panic as I thought that she had run into difficulty and that why she had not passed us. My mum was more positive and suggested the opposite- that she was running ahead of time and we missed her that way so we should go further up the course in an attempt to see her. 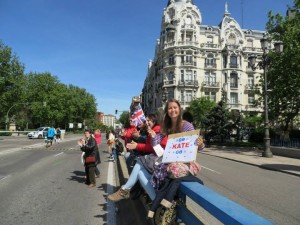 Waiting at the half-way point!

So, it was at mile 24 when I eventually saw my amazing sister and my mum and I cheered so hard, out of pure relief that she was doing well! She finished the race in 4 hours and 14 minutes which wasn’t quite her personal best but she found the race more challenging than others due to the heat and hilly terrain so I couldn’t have been more proud of her.

We then went for another big carby meal (my favourite kind!) and then on Monday, it was time for Katherine to go back home so she hobbled (and I walked normally) to the metro station to the airport! It was so cool watching a marathon abroad and I saw so many examples of good sportsmanship, it was a great day. Perhaps one day I’ll follow after my sister and run a marathon too! 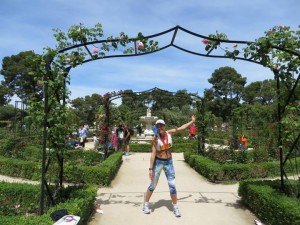 My incredible sister after the race