Last weekend, Madrid was a hive of activity. Not only were the celebrations of Madrid’s patron saint, San Isidro, taking place but there was also a crucial decider football match in the Spanish version of the Premiership which is called La Liga.

On Saturday night, every television in every home and bar in Madrid was (probably) switched on to watch the Atlético de Madrid play against FC Barcelona. Whoever won this match would be the overall winners of this year’s La Liga, something that Atlético de Madrid haven’t been in the last 18 years. Although Real Madrid are arguably the bigger Madrid football club, there were hundreds upon hundreds of Atlético supporters wearing the team colours of red and white over the weekend. And when it was time for the match, the team did the city proud and won! My sister and her boyfriend Alex were visiting this weekend and Alex went to bar to watch the match while Kristina and I had some sister time. Alex was the only English person in the bar but he said it didn’t matter, the supporters embraced his presence and when Atlético won, strangers started hugging him and patting Alex on the back as they were so happy!

As well as all this excitement, Thursday was a bank holiday and all weekend long there were celebrations for Madrid’s patron saint. San Isidro was a farmer known for taking special care of the poor and animals and for this reason he is remembered in the city. In the park of San Isidro on Thursday, La Pradera took place. This is a fiesta where there are stalls selling typical Spanish food and dancers called chulapos or chulapas who perform a special style of dance where the man pivots on one foot while the woman dances around him. The chulapas have a special dress they wear for the occasion and it is usually beautifully coloured and decorated with polka-dots. The woman also wear a carnation on their heads. We enjoyed the dancing and stalls and sat in the park drinking some Tinto de Verano and eating crisps! 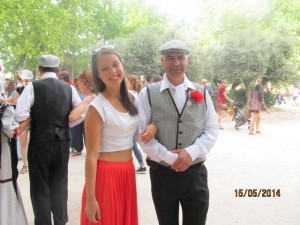 As-well as the food, drinking and dancing, there were also fireworks in Retiro park on every evening of the weekend and my sister, Alex, my flatmate Dalia and I went to see them on Saturday. They were fairly short (just 5 minutes of display) but they were very beautiful as the fireworks reflected onto the lake in the park.

It was such a great weekend to have my sister and Alex here as Madrid really was at its best, full of happy people celebrating San Isidro and the football game. Occasions like this really make me feel lucky to be here as although I love and miss England very much, this weekend was an incredible weekend to be in Madrid.