Hello! This is my first blog post so I thought I’d introduce myself to you all. I’m studying French and Spanish at Leicester and I’ve just finished my third year which means I’ll be heading back to Leicester for my fourth and final year in October. The third year of a languages degree is a terrifying, thrilling and unforgettable year abroad. In July of last year I boarded a plane to the salsa-dancing, football-mad capital city of Colombia (Bogotá) and I’ve been studying in Avignon since January, which is an ancient papal city in the south of France where there’s plenty of pains au chocolat and where it’s always sunny. Until term starts in October I’m in a kind of limbo between the year abroad and the start of fourth year. I’m in no hurry to head home yet though, so until October I’ll be sharing anecdotes about my life here in France and my efforts to become trilingual. Once October starts, when I’ll be back home in Leicester, I assume I’ll be blogging about the prospects and opportunities available for linguist graduates, as well as about the expectations and demands of fourth year. 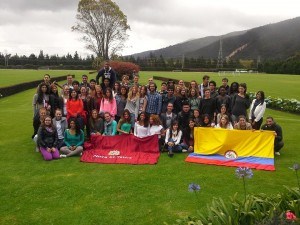 To end this blog post with some good news, have you seen the Guardian’s 2016 university league table? Leicester came third out of all UK universities for modern languages, which means it really is a fantastic time to be studying languages at Leicester!

I hope you’re all enjoying your summers 🙂