Last Friday we went to a restaurant just round the corner from the apartment I’ve been renting for the past 5 months in Avignon. I’ve seen this particular restaurant many times on my way to and from uni. It’s painted a dark purple and over the door in gothic gold letters it states: “Le Bistrot Lyonnais”. 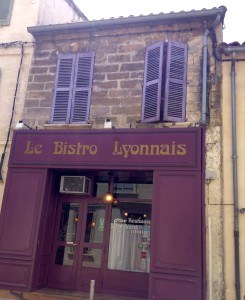 It’s a family-run business, which is one of the many things I’ve come to love about France. At home in England many cities feel the same: there’s a Topshop, a Nando’s and a Costa Coffee. In France there are a lot more independently run shops and restaurants, which means you never know quite what to expect when you sit down for a meal.

Even so, I was left a little speechless at this little French restaurant. The chef breezes out of the kitchen wearing a pristine white chef’s hat. He remarks in a heavy French accent, “I’m a bum, you know?”

“Yeah, not a sex bomb though…” (It’s here I realise he meant to say bomb and not bum), “…a GASTRONOMIC bomb!” And with that final statement he hurries off into the kitchen to cook up some more delicious food.

I didn’t think the evening could get any more bizarre. Until, that is, my boyfriend decided to order la cervelle. It looks like squidgy fried pieces of cauliflower but it’s actually fried brains! Is my boyfriend a zombie?! My tourist instinct took over and I couldn’t help taking a photo. 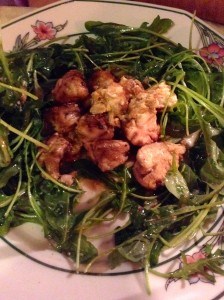 A hearty portion of cervelle

Sorry for anyone who’s a bit squeamish out there. If it helps, I’m a vegetarian and a bit squeamish about eating brains too! It’s these surreal moments that make travelling so much fun and that make the year abroad such an unforgettable experience. Does any one else have any strange tales to tell of their travels?