August has been a month of adjustment for me. I went home to Leicester at the start of the month and suffered from reverse culture shock, a subject which Katie wrote a really great blog post about here. I’d just adjusted to being back in England when I boarded my return flight to France. I’ll be staying here until the last week of September.

In the midst of all this readjusting, I’ve caught a really bad cold too! The sky’s bright blue and it’s really warm weather here in Avignon, but I’m stuck indoors with a pack of tissues, a carton of orange juice and a bottle of cough syrup.

So, while I’m run down with a bunged-up nose and a tickling throat, I thought I’d share some recipes with you because there is really nothing quite as comforting as food. The new series of the Great British Bake Off is also currently on TV, which has sort of put me in a baking mood.

I’ve also found that cooking has been a good way of dealing with reverse culture shock. Being abroad you get to try (and learn to make) lots of new dishes. Some of them have proven to be a bit too bizarre  to cook for my family at home in England, such as la cervelle, which I wrote about in a previous blog post. Most of the new dishes I’ve tried have been really tasty and I’ve found that being able to eat the food I enjoyed on my year-abroad helped me to readjust to life back in England.

So, I’m going to share a recipe that my boyfriend’s grandma taught me. 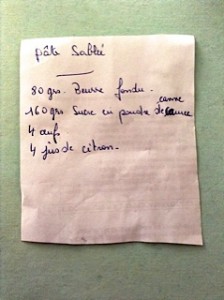 I love going to visit my boyfriend’s grandma (or Mémé, as she’s known) not only because she’s a really lovely lady from the north of France with coiffured hair and brown eyes that scrutinise me behind her thick-rimmed glasses, but also because she’s an amazing cook. Every time we visit her we leave with full bellies and containers full of scrumptious leftovers.

It’s a really easy recipe to make. While the pasty cooks in a suitable pie dish in the oven, add the butter and sugar to a pan on a low heat. Then add the 4 whisked eggs and the juice of the lemons. Keep stirring until the mixture reaches a thick consistency and then take off the heat. As soon as the pastry is a light brown, remove it from the oven and pour in the lemon mixture from the pan. Voilà! Once it’s cool, it’s ready to eat.

What I love about this recipe is that it’s not just really simple to make, it also tastes really good and it’s really French.