Posted by Hannah in Modern Languages on September 3, 2018

So, I have officially been in Spain for four days. Day one was a blur of travelling, emotional goodbyes and the trials of dragging all the worldly belongings that I own for the next four months behind me in two suitcases. I spent my first day in Madrid. Other than the whole moving country thing, it was pretty uneventful. 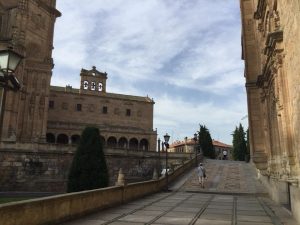 Day two was the last leg of my journey, a three-hour train between Madrid and Salamanca, where I will be living, studying and (hopefully) partying until Christmas. Fortunately, my mum had sent me prepared and I passed the journey, feasting on sausage rolls and cake. There are definitely worse ways to travel! Once I had arrived at my accommodation, a block of flats in central Salamanca that I had found on Airbnb, I began to get acquainted with the city by way of a supermarket run. (Wo)man cannot live on cake alone!

Day three was a day of rest for me. Two days of travelling and I was exhausted, so I gave myself a well-deserved break from the world and stayed in bed all day, watching reruns of Gilmore Girls.

Now fully recuperated, I passed this morning exploring the city. As a foodie, I was determined to find the covered market and scope out the best places to buy fruit, meat and bread, so I got up early to avoid the midday heat and set out. My wanderings also took me across the River Tormes. The view of the historic city from the bridge is more than postcard worthy! All in all, it was a successful morning of sightseeing and shopping. 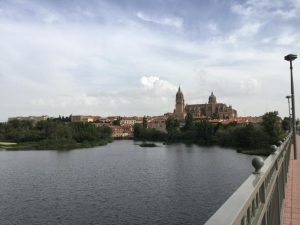 Salamanca from the River

The heat here will take some getting used to (it has been 30+ degrees since I arrived) but there are some things that I’m adapting to rather easily. Turns out that I’m already a natural at siestas! I have also learnt that the Spanish are much more willing to help a stranger out than the British. Over the course of my journey, I had a gentleman make sure I got on the right train and off at the right stop, another helped me figure out the metro when he saw me looking very lost, and no less than eight people help me carry my (very heavy) suitcases up and down flights of steps. Bienvenido a España, indeed!