Posted by Hannah in Modern Languages on November 18, 2018

One of the best things about your year abroad is that you will suddenly have friends living all over the world, providing the perfect opportunity to visit some spectacular places. This is exactly what I did this week. Having never before been to Italy (somehow every member of my family had managed to go at some point, each time without me), I knew as soon as one of my closest friends received her placement in Padova that I would be making the time to visit her! Four cities in six days was exhausting but definitely the best experience of my year abroad so far!

Our host city for the week was Padova, a student city that seamlessly combined history with all the amenities demanded by its younger demographic. Nursing a minor hangover from the flat party that we were invited to on the first night of my visit, I let my friend show me around the city that had been her home for the last three months. Stops on our tour included the oldest botanical garden in the country, the still incomplete basilica of St Anthony, which is now home to his tongue, and Prato della Valle, a stunning square just outside of the main city centre which is formed by an oval canal ringed by statues which looked like they belonged in a Tolkien book, the largest and (dare I say it?) one of the most beautiful squares in Italy. 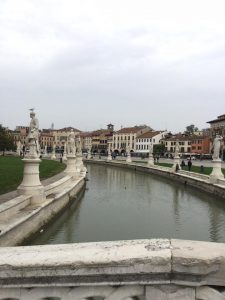 The city of star-crossed lovers and it’s easy to understand why! Day two took us to Verona, situated about an hour from Padova by train. Although a popular tourist destination (thanks to the Bard himself), Verona didn’t have that same tourist-y vibe as some of the other cities we visited. Instead, the medieval streets and buildings allowed for a peaceful day of meandering, interspersed with some truly magnificent sights. One of these was the Arena, a roman amphitheatre dating back even further than the Colosseum in Rome, which is so well preserved that it is still used for public events. Another was the Castelvecchio, a medieval castle turned art gallery with incredible views of the river from the 14th century bridge adjacent. 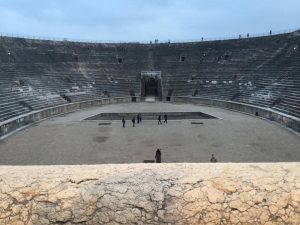 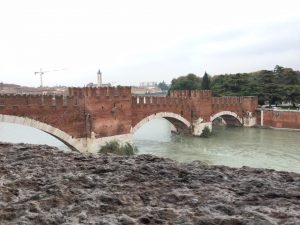 When you think of Italy, Venice is surely one of the first cities which comes to mind. Unique in the fact that it is comprised almost entirely of canals rather than roads, Venice at any given time is a bustling hotspot of travellers and sightseers. However, I was reliably informed that to truly enjoy this city, you simply had to get lost. With my sense of direction, this was an easy task. Soon enough, we had moved away from the famed attraction of Piazza San Marco and found ourselves deep in the network of smaller canals and crossings that form the true beauty of Venice. This is a city where the beauty truly is in the details, from elegantly wrought bridges and the colourful facades of the waterfront buildings, to the sleek gondolas and calm waters. 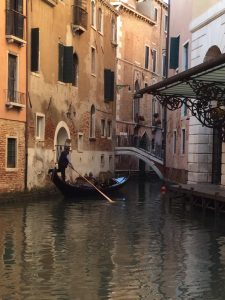 The last adventure of the week took us to Bologna, an hour and a half’s journey from Padova and, again, a place unlikely any of the others we had visited. This urban hub, upon first glance, was not dissimilar to that of London, sleek streets filled with shops and restaurants. Yet, these streets boasted their own spectacles and every now and then, you would stumble upon something that would remind you that this was very much still Italy. Perhaps the most impressive of these were to two towers located at the heart of the historic centre. The taller of the two was an impressive 498 steps high and, once more determined that my fear of heights would not ruin my experience, we climbed all the way to the top. Even from my position pressed against the outer wall of the tower and determinedly not looking down over the balcony edge, I couldn’t miss the beauty of the scene before me. At around 4:30pm, the sun was just beginning to set over the distant mountains, casting a rosy glow over the rooftops below us. More than worth the terrifying climb back down! 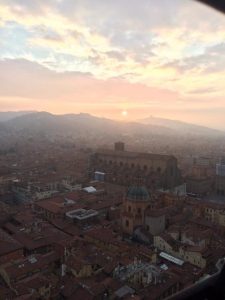 View from the Tower

While the places we visited were each unlike any I had experienced before, it wasn’t these day trips or the (incredible) Italian food that were the highlights of my trip. Most people, when I have asked them about their year abroad, say that the things they miss the most are their family and their friends. Getting to spend a week with my friend allowed me a little bit of home away from home, the beautiful surroundings were just an added bonus.