Posted by Hannah in Modern Languages on December 2, 2018

Last weekend, I embarked on my first organised trip with the company Yeah Salamanca. This took me on a four-hour bus journey across the Spanish border and on to Porto, in Portugal. This city is on the west coast of Portugal and is primarily known for the wine which shares its name: Port. We spent two days in the city, arriving around 10am on the Saturday, after an obscenely early start, and leaving at 4pm on the Sunday. For anyone considering a doing their year abroad in Salamanca and wanting to know more about the activities on offer, here is my review of the trip!

First up on the itinerary was a boat tour on the Duero river, a chance to see the three famous bridges of Porto up close and personal. This included the Louis I bridge, an impressive structure built in the same style as the Eiffel Tower. The tour last around half an hour and included an audio guide in Spanish, English and French. 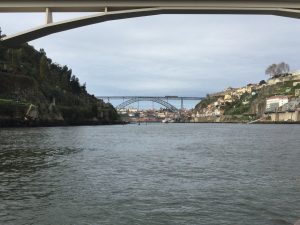 No trip to Porto would be complete without a trip to the Bodegas, the wine cellars in which they store the port. After a short tour, we got down to the good stuff- the tasting! The stars certainly aligned for me that day as I discovered that the friend who I was travelling with is allergic to alcohol. Two generously sized glasses of tawny port later and I was starting to feel a little less resentful about our early morning! This tour also gave me the opportunity to buy my parents’ Christmas present. Another one off the list!

As a foodie, lunch on the first day was certainly one of the highlights of this trip. Having wandered along the river bank for a short while, we stumbled upon Tappas Caffé Regional. Having heard great things about the local dish of Francesinha, it didn’t take us long to decide and we were not disappointed. As a kind of toastie, containing layers of sausage, ham and steak, topped with cheese and smothered in gravy, this certainly delighted the carnivore in me! If you’re ever in Porto, I whole-heartedly recommend both the dish and the restaurant. The service was swift and friendly and Bruno, our server, even took the time to teach us a little Portuguese and insisted on doing shots with us before we left. 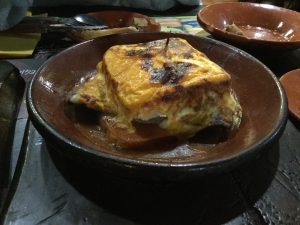 We stayed at Bluesock hostel in the centre of Porto. Recently renovated, the rooms were modern, clean and comfortable! Even with eight to a room, the area was spacious enough that you didn’t feel like you were stepping on each other’s toes and each bed had its own curtain which added a sense of privacy. The hostel itself was conveniently located, within minutes of the bustling river bank and many of the tourist attractions. There was also a decent breakfast included to set us up for the next day.

Also included in the price of the trip was entry to one of the clubs in the city. For me, this was perhaps the one let down of the trip. Having been up since 4:45 am, I didn’t particularly want to go to start with, but my friend insisted so off we traipsed at 12:15am on the Sunday with the rest of the group, only to find that it didn’t actually open until 1am. Twenty minutes of standing in the cold later, we finally got in. Except for our group the club was empty, and the music was largely unknown. Even the English songs were all Greek to me!

Sunday was a free day to explore the rest of the city at our own pace. Running on about four hours of sleep and copious amounts of coffee, my friend and I headed out early to make the most of our remaining time. The highlights of this day included the Lello bookshop (widely credited for being J.K’s inspiration for the library in Harry Potter), the Palácio da Bolsa (a 19th century building commissioned by Queen Mary II for the stock exchange market in Porto) and the Gardens of the Palácio de Cristal, a sprawling three tier spread of intricate landscaping which boast incredible views of the city. 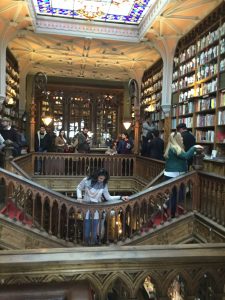 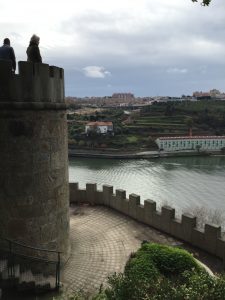 The price of this trip was 99€ and included travel, accommodation, breakfast, the river cruise and trips to the bodegas and the nightclub. All in all, it was a thoroughly enjoyable experience and a great opportunity to travel to a country that I had never before had the opportunity to visit. If you’re in Salamanca for studies or just a holiday, I recommend trying to fit in a trip to Porto! As always, if you have any comments on or queries about my travels or any other aspect of my year abroad, leave me a comment below.