Posted by Hannah in Modern Languages on December 19, 2018

This is it, my final few days in Spain and the end of my first semester abroad! As of tomorrow, I will once again be dragging all my worldly possessions behind me in a suitcase as I head to Madrid for the night, before my early flight on Friday morning. To say that I am excited to go home is something of an understatement, seeing my mum and my dogs (and indulging in a mince pie or two) will be incredible! However, I will also be sad to leave. This term has been amazing in terms of the people I have met, the places I have been and the things I have learnt, both about the country I am in and myself. This being so, my friend and I decided to make the most of our last weekend here by way of a trip to Toledo. We had heard great things about this city but, even in our wildest dreams, we could not have anticipated the beauty that awaited us!

Toledo can be found a half hour’s train journey from Madrid, situated on a hill overlooking the Tagus river. After having spent four months in the very urban city of Salamanca, being surrounded by nature once more was delightful! I took advantage of the fact that my friend had to finish an assignment on the first night to go on the recommended nature walk around the outskirts of the city. Alone with the birds and the rushing water, I almost felt like I was back in my very rural part of England! As I had timed my walk to coincide with the sunset, by the time I had completed the forty-minute route and returned to the city, evening had fallen, and the city was illuminated with Christmas nights. The result was a stunning walk back through the city to the Airbnb that we were staying in. 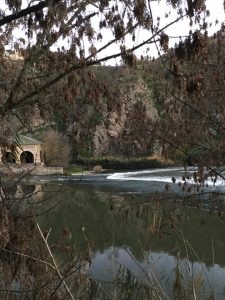 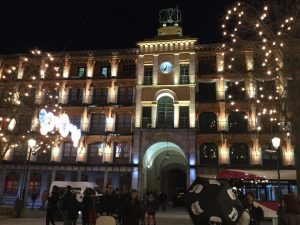 The second day, we rose early and started touristing in earnest! The morning was taken up with tours of the Christmas markets, the cathedral and the alcazar. The old castle has been converted into a museum, but a lot of the original structure remains. Lunch was definitely one of the hightlights of the day! A quick google search on the restaurants in the area had revealed that there was a jacket potato café in the city, Patata y Olé! As I have been without an oven for the last four months, I begged my friend to allow me to indulge in this very British delicacy! The result was two very happy tourists! Afterwards, we took a steady walk through the city streets to admire the unique architecture of the city, a result of the three cultures which coexisted there historically. That evening, we left the main city and headed up the opposite hill in search of the Mirador de la Valle, the point that allowed for the best views over the city. Google and our host had recommended that we aim to be there in time for sunset and we happily complied. Again, we were not disappointed! The sunset cast a rosy glow over the buildings, transforming all the sights that we had seen that morning into something that belonged in a fairy-tale. 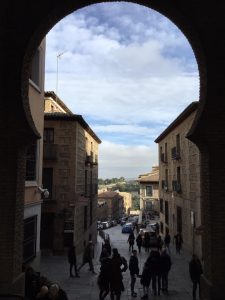 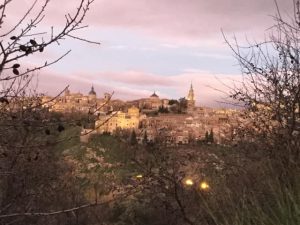 Sunday morning, we took an early train back to Madrid and seized the opportunity to explore a little bit of the capital before our blablacar arrived to pick us up. The rain held off long enough for us to explore a selection of the plazas from Mayor to España and Sol. Again, internet recommendations informed our lunch choices and we ended up in a Japanese restaurant, Ramen Kagura, about five minutes from the Plaza Mayor. Although we arrived ten minutes before it opened, there was already a queue to get in! A good sign, we thought, and we were right! My pork katsu curry was one of the best things I’ve eaten since being in Spain and, with large portions and reasonable prices, this is definitely a place to visit if you’re ever in the area! 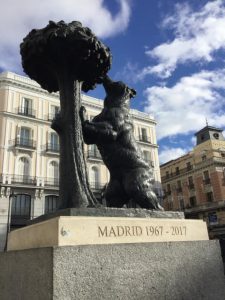 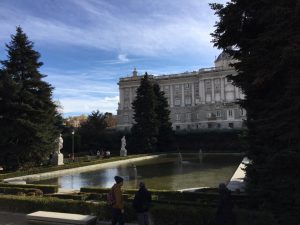 Our journey home was a little different to the train ride there as we had decided to give Blablacar a go! This is an app that is very popular in Spain and reminds me a little of Airbnb, but with cars rather than houses! Driver simply advertise their routes on the website, along with how many seats they have available and their requested price for travel. Our drivers were a lovely, middle aged lady called Rosa and her husband Juan. We passed the journey chatting about Christmas traditions, the places we had visited in Spain and they were even happy to give us a few recommendations on which wines we should take home for our parents! This also gave us an opportunity to practice our Spanish in a conversational setting! All in all, it was a much more comfortable and fun way to pass the journey than it would have been had we used public transport. The fact that it was half the price of the trains was simply an added bonus!

So that’s it from me until after Christmas now! I hope you all have a lovely holiday and I wish you a very merry Christmas!