Posted by Hannah in Modern Languages on January 13, 2019

New year, new country. This week I embarked on the second leg of my year abroad which will see me passing the next six months in Pau, in the south of France. After a journey involving fifteen hours of travel, five different means of transport and a terrifying half hour during which I didn’t know whether I’d be allowed on the last train from Bordeaux to Pau due to it being fully booked (not only did the ticket inspector let me on, she also gave me a 50% discount on my fare, so it was almost worth the stress), I made it! 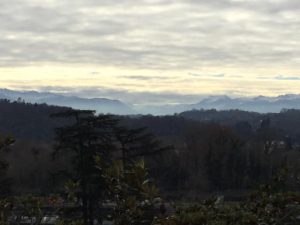 View of the Pyrénées

I spent the first day settling into my accommodation, a flat which I found on the French website Roomlala, locating the supermarkets and, most importantly, introducing myself to the cat who lives on the property! At least I won’t be lonely for the next six months! Even though I’m living in the outskirts, so as to be closer to the university, there are still plenty of amenities around, including more flower shops than any community can possibly require and one of the biggest supermarkets that I have ever seen. It’s big enough that it has its own lobster tanks for those customers who are so inclined! This also allowed me to buy a few little bits for my room to make it feel more homely. 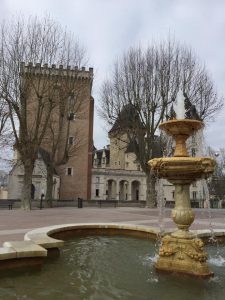 Day two was the day I started to explore my new city. It was a half hour walk from my accommodation to the historic centre but well worth the effort! My route took me through Parc Beaumont, along the length of the Boulevard des Pyrénées with its famed funicular and stunning views of the distant mountains, and into the city centre to explore some of the shops and sights. One of these was the covered market. I had heard amazing things about the meat markets in Pau and, even though I, unfortunately, timed my visit for when everything seemed to be starting to close, I still managed to get a good idea of the scope of this operation! It definitely requires a second visit, once I’ve figured out the timetables! 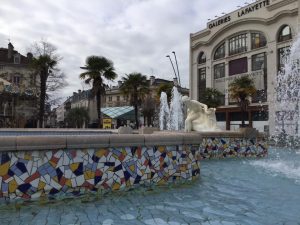 As I’m not really one for making New Year’s resolutions, this year I am simply going to task myself with seeing as much of the region as I possible can. From the cities of Toulouse and Bordeaux to the many hiking routes and natural parks that surround Pau, I certainly will not have time to miss rainy old England!