Posted by Hannah in Modern Languages on February 17, 2019

Last weekend I travelled to Lyon to celebrate my birthday (in the immortal words of Taylor Swift, ‘I’m feeling 22!’). This meant stopping overnight in Toulouse on Thursday before catching an early flight to the city on Friday morning. This gave me the opportunity to see two cities in one trip, something that I always appreciate as it allows me to be more economic with my time and money! Both cities were incredible and completely different from what I had gotten used to in Pau! 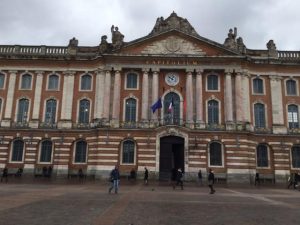 As I only spent half a day in Toulouse, I perhaps didn’t get to see everything that the city had to offer but I definitely made a good go of it. From the impressive red stone buildings and modern art covered walkways of the Place de Capitole to the trio of parks that I discovered surrounding the Natural History Museum, Toulouse is full of gems, some hidden and some less so! The parks were impressive for their fountains and the ornate bridges which arched over the busy roads, linking them and allowing visitors to remain within the peace of the green spaces. However, the highlight for me was seeing red squirrels there, creatures which I have never seen in England! (They are considerably cuter than their grey cousins!) I even managed to navigate both the metro and the tram without having to beg the locals for help, definitely a step up from my attempts to find my way around Madrid last term. I look forward to returning to Toulouse and exploring the rest of the city next time I’m flying from there (probably in May when I’m heading to Rome!) 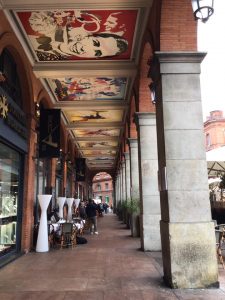 Lyon was the main event of my birthday weekend. With routes from both Toulouse and Birmingham, it served as a perfect meeting point for myself and my mum, who flew to France to celebrate with me! The old town was stunning with its impressive basilica which dominated the skyline from its hilltop perch and the ruins of the old roman amphitheatre which is left open for public explorations, but it was the zoo which really stole the show for us! Nestled in the heart of the public park, the zoo was completely free and beyond anything either of us had expected. You simply turned a corner and there were giraffes! We definitely left feeling very jealous of the people of Lyon who had such an amazing day out literally on their doorsteps. Perhaps if we ask Leicester Town Council very nicely, they’ll consider adding one that’s a bit closer to home! Unfortunately, the gilets jaunes riots in town cut the celebrations a little short as most of the restaurants seemed to shut down in expectation of the violent protests. While I cannot blame the business owner in the slightest for making that decision, this will definitely be something that I bear in mind for future travels as France wakes up from its 14th week of demonstrations. 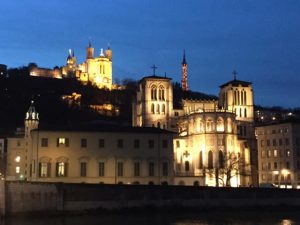 Vieux Lyon from the river

Ultimately, last weekend marked one of the best birthday celebrations that I’ve ever had. The chance to catch up with my mum and show her a little bit of the world that I’m living in at the moment was amazing. Looks like 22 is the new 21, who would have know?!