Posted by Hannah in Modern Languages on March 28, 2019

As mentioned in my previous post, I spent last weekend in San Sebastian, Spain. Although this trip involved crossing the French/Spanish border, the journey only took three hours by bus and cost me a mere 10€ each way. And it was more than worth it! In addition to the stunning architecture in the old part of the city, San Sebastián is home to three beaches, overlooked by hills which offer incredible panoramas of the city and its coastline. 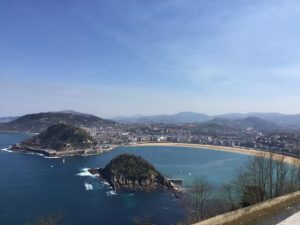 My coach from Pau arrived in San Sebastián at 12:45pm, allowing me 15 minutes to gape at the impressive María Cristina bridge before my friend’s train rolled in just after one. From the train station, we made our way to the apartment we had found on Airbnb, perfectly situated at a 10-minute walk from the station and 5 minutes to the beach in the opposite direction. After quickly unpacking, we decided to tackle the important task of sight-seeing first and headed for the old town. We visited the city hall and its plaza, the cathedral (although, unfortunately, this is undergoing maintenance currently, so we missed out on seeing it in its full glory) and several parks and monuments before trekking up the first of two hills to watch the sun set over the city. We then treated ourselves to churros and hot chocolate for dinner before heading back to the apartment for a good night’s sleep. 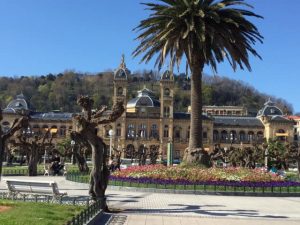 We spent the first half of Saturday finishing up our sightseeing of the city, catching the public bus to the Miramar palace and taking a lazy stroll around its gardens. We tackled lunch the French way, grabbing a baguette and some cheese and meats from the supermarket before heading to the funicular to transport us to the top of the second hill. We figured that, as we had trek to the top of the other hill the day before, we deserved to take it a bit easier that day! After a picnic in the sunshine, looking out over the beach and ocean below, we had a quick wander around the funfair that was perched up there, scaring ourselves senseless in the haunted house (why anyone would consider a minor heart attack to be fun, I could not tell you). We spent the evening eating ice cream on the beach and watching the surfers battle the waves. All in all, a perfect day! 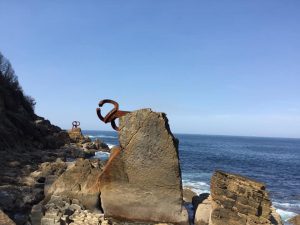 Having seen all that we wished to see, we returned to the beach Sunday morning to make the most of the sunshine before we had to travel back to our respective cities. Breakfast was a slice of cake from one of the nearby cafes. After churros and ice cream, there really was no point in attempting to be healthy! When we returned to the station to head home, it was with slightly sunburnt faces and the overwhelming desire to remain by the sea!