This blog post is my 60th and my last. I’ve thoroughly enjoyed the last 2 years of blogging but as I’m going into my Final Year of studies in September, I thought I would retire now from the world of blogging. Re-reading some of my old posts has made me realise just how much has […]

The Careers Service at UoL

At Leicester, we’re lucky to have a Careers Service whose job it is to help the students with all things careers related- from general guidance, to giving feedback on our CVs, to providing mock assessment centres for us. As mentioned in my last post, I’m really starting to think seriously about my future career but […]

For me, thinking about life after Uni is a strange strange thought. As I am studying Languages which is a 4 year course, I still have a year in Leicester filled with hard work and fun times to come but as you may have read in some of my fellow bloggers’ posts, this week has […]

Life in the Shire- Cows, BBQs and Results

In my opinion, I live in the best Shire in England- Cheshire! Having not been at home since early February, I was very excited to spend time here after my Year Abroad as even though it’s very quiet around these parts, there is no place like home. In-fact, one of the things that I was […]

The End of My Erasmus Year

Last Saturday, my Year Abroad officially ended as I got back on a plane to England for the first time in 4 months. As I got into the taxi that took my suitcases and I to the airport, I was overcome with emotion. Seeing my flatmates waving me off made me so sad that I […] 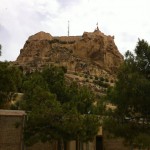 Last Tuesday, I had my last ever class at the Complutense! So to celebrate this occasion, I made a trip to Alicante with my boyfriend to relax and recharge before starting revision for exams. We chose to go to Alicante as it was somewhere new to us both and it was very reasonable to travel […] 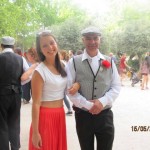 Last weekend, Madrid was a hive of activity. Not only were the celebrations of Madrid’s patron saint, San Isidro, taking place but there was also a crucial decider football match in the Spanish version of the Premiership which is called La Liga. On Saturday night, every television in every home and bar in Madrid was […] 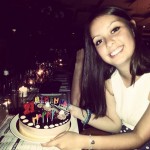 At the start of this month (the 1st to be precise!), I turned the ripe old age of 21! It was bittersweet being away from home for this milestone birthday as it meant I wasn’t able to be with all of my family and friends there but my friends here more than made up for […] 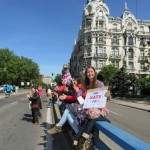 This past weekend was a very exciting one as I had my mum and sister, Katherine, to visit it me here in Madrid. The main reason for their visit (other than to see their beloved daughter/sister!) was because Katherine had signed up to run the Madrid marathon. Having already done 2 marathons in England, as […]