Happy Christmas! I am currently enjoying a very relaxing Christmas break, watching a lot of telly and not doing a great deal else. The only work I have to do this holiday is some programming as part of my project on ‘Gravitational collapse in 1 dimension’. Therefore, since my life would make a very boring blog at the moment, I thought I’d write a little about something very interesting: the geon.

Geons were first proposed by the great scientist John Archibald Wheeler in 1955. Wheeler is an important figure in 20th century Physics and he worked with the likes of Fermi, Bohr and Feynman. Not only did he play an important role in the 2nd world war in the form of fission technology, his work on general relativity shaped 21st century theoretical physics. If you would like to learn more about Wheeler and his contribution to Physics try reading ‘Geons, Blackholes and Quantum Foam: A Life in Physics’ by J.A. Wheeler with Kenneth Ford.

In order to arrive at the concept of a geon, Wheeler used Einstein’s famous equation

where E is energy, m is mass and c is the speed of light. The implications of this equation are vast; the most obvious and perhaps profound being that energy and mass are equivalent. Let us put this fact into the context of general relativity. The geometry of spacetime is shaped by mass and this ‘shaping’ is what we call gravity. The famous analogy associated with this fact is that of a bowling ball placed in the centre of a taut blanket. The blanket will bend about the ball, just as spacetime is curved by mass. However, we know mass and energy are equivalent, so is spacetime also shaped by energy? Short answer: yes. Einstein demonstrated all energy is a source of gravity.

The curving of spacetime about Earth.

Wheeler applied this concept to light. Light is a source of energy therefore it is a source of gravitational force. He then took this idea to the extreme. If light is a source of gravity, how much light would it take to produce a gravitational force so strong it would confine the light into an orbit, maintained by its own gravity? Wheeler dubbed this ‘light circle’ a geon. A way of viewing this concept is to consider the bending of light by the Sun, as observed by Eddington in 1919 in his famous trip to Brazil. If the Sun is replaced by a large enough mass the light will be ‘trapped’ in an orbit by the mass. Now replace this central mass with the mass of the light itself and you have your geon. 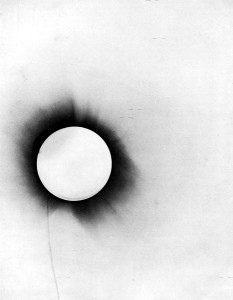 One of the photos taken by Eddington of the 1919 solar eclipse.

In ‘ Geons, Blackholes and Quantum Foam’ Wheeler states the g in geon  stands for for ‘gravity’, the e is ‘electromagnetic radiation’ and the ‘on’ is the word root for ‘particle’. Interestingly, Wheeler later proved geons would either ‘blow up’ or ‘implode’ very quickly if they were ever to form. However he also gave us the tantalising suggestion that maybe geons had a very brief existence in the early universe, or perhaps they are flashing into and out of existence right now. Wheeler even suggested they could be a step in the creation of a black hole since the implosion of a geon would form a singularity.

For a video of John Wheeler talking about geons click here.