The deadline for the fourth year project posters has been announced and the race is on! After six weeks of battling with R I have produced a variety of nice looking graphs and a few hundred lines of code. But what’s it all about? I don’t think I have given any explanation of the project in my blogs to date other than giving vague references to ‘dark matter haloes’ and ‘one dimension’.  So here goes nothing… 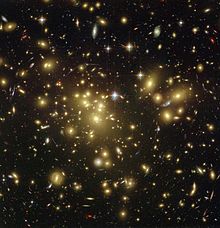 Gravitational lensing is an indicator of the presence of dark matter. Image captured by the Hubble Space Telescope.

Firstly I’ll give a very brief explanation of how the fourth year project module works. At the end of third year every student is sent a long list of possible research projects which range from experimental to theoretical and are in a broad range of disciplines. For example one of my friends is studying the accretion processes of supermassive black holes and another is looking into the quantum states of an artificial 1-dimensional atom. You are asked to choose 5 from this list and send your choices via email, indicating your order of preference. The allocations then take place before the end of term. As for getting your first choice – I did and so did a lot of people I know, so I guess there is a good chance you’ll get your favourite.

Now comes the 5 month wait until mid-November, when you are given an induction into the project and what you will be asked to produce during the spring term. After Christmas you typically meet with your project supervisor once a week (or in my case three times weekly when I need help on a bit of code). At the end of the term you are asked to produce a poster summarising your results. Posters are a common form of communication at conferences; therefore the ability to produce a clear and attention-grabbing representation of your project work is a good skill to learn if you want a career in research.   We are also asked to give a ten minute presentation of the poster to two academic members of staff and answer questions afterwards. Finally, we then have the whole of the Easter holiday to produce a report on the project (typically this will consist of 15 pages).

The title of my project  is ‘Gravitational Collapse in 1 Dimension’ and when I first encountered it last June I could at least infer one thing: this is not going to be experimental!  The project looks at a system consisting of approximately 16000 ‘cold’ particles subject to 1-dimensional gravity and how the density of this system will alter over time. The term ‘cold’ here means the gravitational interaction between particles dominates over their velocity dispersion (the spread in velocity of the particles). A perfectly cold state would therefore refer to one in which there is just one velocity at any location. The particles are positioned equidistantly in x and given a velocity which depends on their position. Therefore, if you plot a graph with velocity on the y-axis and position x on the x-axis (this sort of plot is known as a ‘phase-space’ diagram) you end up with a smooth curve for a cold system.

So what is the significance of 1-dimensional gravity? In 3D you will know the gravitational force between masses is proportional to 1/r2, however when we only consider 1 dimension this dependence vanishes and the force is constant between particles. Very strange! Let’s think of it another way; the particles are effectively parallel ‘sheets’. These sheets are analogous to infinitely-long parallel plates with opposite charge. From your A-level studies you may know that the field between these plates is not dependent on the distance between the plates, only on the permittivity of free space and the charge density of the each sheet.

The initial velocities and positions given to the particles in the system result in a state which is gravitationally unstable (i.e. the forces are not balanced) and it will collapse as soon as it is run forward in time.  If the system is allowed to evolve the paths of neighbouring particles will cross. At these ‘crossing points’ the particles are swapped and the force on each of them is adjusted due to their new position along x. The significance of this ‘swapping’ is that it represents the fact the system is ‘collisionless’, which means the velocity of a particle remains unchanged after a collision. The result is the same as if the particles had collided ‘elastically’ (a term you may have come across before).  The simulation works by computing the earliest crossing time, undergoing this swapping process and then repeating the whole cycle once again with the new particle arrangement. After a while you end up with a beautiful spiral like so: 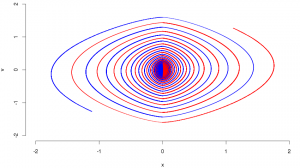 Very pretty yes, but what has this got to do with dark matter? And where does the density come into it? Well, to answer the first question; dark matter is believed to be ‘cold’ in the same sense as for these ‘sheet’ particles. Also, like the particles dark matter that is in the same ‘cold’ initial state is gravitationally unstable and collapses into structures such as haloes and filaments. Now, we could look at the evolution of the haloes using 3-dimensions, however there are many advantages to sticking to 1D. Firstly, it’s easier on the computer and more particles can be used. Secondly, 3D simulations are no doubt subject to the same (systematic) errors as 1D simulations; hence 1D systems offer an easier way to investigate these errors. Finally, the density profile observed in 1D space can suggest the reasons behind the ‘universal halo profile’ seen in 3D space.

This reference to a ‘universal halo profile’  alludes to the fact that cosmological simulations of collapsed haloes appear to result in a density profile of the same form. So far the reason behind this has eluded Physicists – and this is where the project comes in! Below is the density profile I obtained from the 1D simulation: 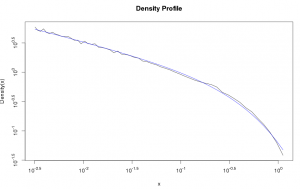 Weird looking right? The rest of my project is looking into the various computation errors associated with these simulations and the equation behind the density profile above.  Fingers crossed the poster presentation goes well! Anyway, hopefully that was of some small interest to you prospective Physics students and that it made a tiny bit of sense!