Applying for PhDs: The Waiting Game

For the last week I have been in Norfolk enjoying the sun and relaxing. I also received some very good news over the weekend – I have been offered a STFC funded PhD project here at Leicester! I therefore thought this would be a good opportunity to talk a little about my experiences applying for PhDs this year in the hope it will be useful if you find yourself in the same situation a few years down the line. 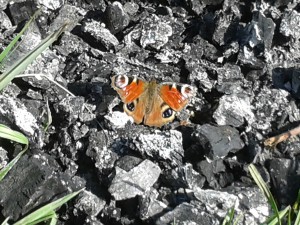 For some reason there was an inordinate number of butterflies in Norfolk this year! I managed to photograph this one with my phone.

I started to glance at possible PhD projects as early as the summer before my final year. At first I found the range of topics and universities pretty daunting and the application forms looked scary too. They tended to ask for something called a ‘research proposal’, along with the dreaded personal statement (which I bet you’re all too familiar with). I had no idea how to begin writing a research proposal, I had visions of a horrific looking scientific document with a detailed plan and timescale of the research I wanted to do. Thankfully I was wrong!

The first thing I did was enlist the help of my personal tutor. I then had a good think about what I really wanted to research; a PhD project is three years long so you really need to enjoy your topic! A significant factor when I made my choice was the fourth year project I undertook. This project  is designed to give you an idea of what it would be like to do a PhD, and an introduction to the current ‘hot topics’ in Physics research.

I was told to aim to make 4-6 PhD applications; in the end I made 5 and am very thankful that I did! Each placement is competitive and from what I can see each institution is looking for something different. I guess it stands to reason the more applications you make the greater the chance one of them will be accepted, or more than one if you’re lucky!

Unless you have a spare £50000 lying around you will probably have to apply for funding for your PhD. I applied purely for STFC funded opportunities, however a few of my friends took advantage of the many other grants and studentships on offer. The opportunities for funding can be dependent on your subject choice – if you are interested in a topic that can be readily applied to industry it is more likely to get funding! As I was interested in theoretical astrophysics, this seemed less likely.

The first application is the worst and it took me three weeks to write a personal statement and research proposal I was happy with. Far from being the exhaustive scientific document I envisioned, many of the universities I applied to actually prefer you not to be too specific when writing your research proposal and instead just outline your general interests.  The greatest emphasis when writing your application seemed to be on the previous projects you have undertaken – so choose wisely in your third and fourth year!

The waiting is by far the worst part of your PhD application. Once I had my applications double- and triple-checked by my tutor I sent them off early this year and began to wait. And wait. A few of my friends were lucky and received invitations to interview within a week of applying. That happened for my application to Cavendish Lab and Leicester, however not for my other three. After waiting a few months to hear back from two of the universities I got in touch and was told they had made offers to other students, however couldn’t reject me since the offer holders had not been accepted yet.

This is a fairly commonplace occurrence for applications for STFC funded PhDs since universities cannot put any pressure on the student to make a decision until after March according to STFC regulations. Sometimes you’re lucky and the person holding the offer will reject it and it will then be offered to you, however waiting for this to happen can be agonizing. I was very lucky at Leicester since the group I was applying to – the Theoretical Astrophysics group – managed to obtain more funding so that I could undertake a second PhD project!

When I was sent my offer I also received an abstract of the project I will be undertaking. Mine is entitled ‘Exo-planetary Environments’ and will involve 3D simulations of the various interactions of hot Jupiters with their parent stars. It starts in October 2014 and I can’t wait! All in all I found the PhD application process pretty nerve-wracking. I ended up on a few ‘reserve lists’ and was unsure I’d be accepted by any of my top choices. I am very lucky that I was and I will certainly be asking for feedback from the universities I was rejected from to find out what I can do better. 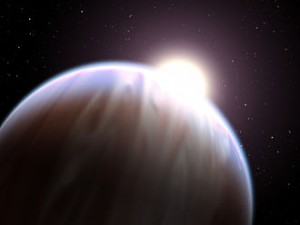 Artistic impression of a hot Jupiter.

My advice to anyone going to apply for PhDs in the future is to apply to 6 places, maybe some earlier than others, and definitely ask for feedback. Also, ask for help from anyone and everyone you can so you produce the best possible application. Finally, don’t beat yourself up while you wait for a decision – silence from the university doesn’t mean you will not get an offer eventually!

2 responses to “Applying for PhDs: The Waiting Game”