My exams are over and I have finally reached the day melodramatically marked ‘FREEDOM’ on my calendar. And with my new-found freedom I decided to take a trip to the Science Museum in London – to remind myself of why I became interested in Physics in the first place. After chickening out of trying the Flight Simulators I found myself staring at clock in an exhibition provocatively named ‘Cosmos and Culture’.

The reason it caught my eye was that instead of keeping time via a pendulum, this clock used a ball bearing travelling down zig-zag path from one side of a inclined tray to another, at which point the tray tipped about a pivot and the ball began to roll back the way it came. Each time the tray tipped marked the passage of 15 seconds. It was invented by Sir William Congreve, most famous for his rockets. Though it does not keep accurate time – a speck of dust can alter the time it takes for the ball to cross the tray – it is very beautiful and testament to the power of human imagination. 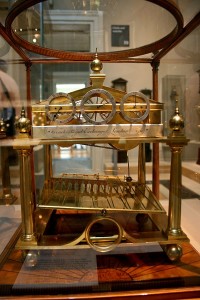 In case my description made no sense at all, here is a picture of the Congreve Clock.

It got me thinking about how we define science in society, in particular how at times scientists are seen as an elite group with a multitude of qualifications to back up every statement they make. Sometimes at school it can seem to be more about passing exams on obscure concepts than the wonder of invention. Inventors like Congreve appear to be a rare breed in our society today and this is something that has also been noticed by the charity Nesta and the government-funded Technology Board.

In case you haven’t seen it, these two organisations have funded something called the Longitude Prize. As far as I can see the idea is to ask anyone and everyone to come up with a solution to a fundamental scientific problem of our generation. And whoever does so wins £10 000 000! The belief is scientists are not an exclusive group of people hidden away at universities but that every one of us has the capacity to be an inventor.  Maybe you could give the questions a look, they can be found here. At the moment the public can vote on their preferred problem and the final selection will be announced on 25th June. Apparently there was a Horizon programme outlining the questions, so it may be worth taking a look on BBC iPlayer.

Personally, I believe by taking up science as a career or hobby you are learning how to change the world for the better. As a scientist you see problem as a chance to get creative. Science is certainly not something that is best kept to the academics, but a way for everyone to tackle issues they face in their own lives and become part of a much wider community that ignores both cultural and physical barriers.