We’re coming up to the start of the academic year at Leicester and I’m pretty excited to be going back (the summer has been very very long). It’s a lot less nerve-wracking to be going back to uni as a second year student – this time last year I was very unsure of what to expect and had a lot of doubts and worries. This blog post is for all the new students feeling like that at the moment.

In the first week of term, our lectures were all about explaining the course in depth, handing out textbooks and hopefully making you feel more at ease about starting university. I would advise new physics students to get familiar with Tipler (your trusty 1500 page textbook) as soon as you get given it. It is a real struggle to carry the textbook around with you all day since it’s so heavy, so you really do need to read the relevant chapters at your uni home before you attend lectures on a topic. The proper lectures will most likely start in the second week of term. Since we have a freshers fortnight rather than freshers week at Leicester, this can mean that you might be sleep deprived and hungover at the first set of physics and maths lectures you have (not good). As a general rule, if you have a 9 or 10am lecture you’re going to regret staying out late drinking the night before – which doesn’t mean that you’re going to avoid doing it again. 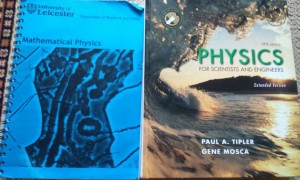 As for some general tips for what to do in lectures themselves, all you technically need to take with you is some lined paper, a pen and a calculator. If you’re a visual person then some different coloured pens might be nice to take in too. Nobody makes notes on a laptop in physics because there are so many awkward symbols and equations to make note of that would take far too long to type out using Word. Tablets in lectures can work for some people, but the majority do stick with paper. When you’re making notes in a lecture the most important thing is to make sure you’re listening to what the lecturer is saying and not just copying down whole sentences from the lecture slides – the slides are usually available online after the lectures so don’t worry about missing information. It’s really important to keep your notes organised from the start so you don’t lose them so you either want to have several folders set up ready to transfer your notes from refill pads to or to use a couple of different notebooks, possibly with dividers in. Experiment with a couple of methods of organisation and I’m sure you can work out what will be best for you.

Hopefully this post has given you a little insight into what to expect in the first 2 weeks of term and prevented a little bit of worrying about the unknown. Remember that first year is the year for finding your feet, asking lots of questions and learning how to learn.