The second optional module that I’ve been studying this past term is Jovian Planets and Moons. I wrote about the other option I was studying in the blog post Fractals and Chaos, so be sure to read that if you’re curious and the post Physics Flavours if you want to know what the other choices are in all years at Leicester.

I have realised at this point that second year options are a lot more demanding than the first year ones. They are worth double the credits so it makes sense that there would be double the content too. In Jovian Planets & Moons there were a lot of lectures so that a wide variety of topics could be discussed. The first few lectures covered the basics of the gas planets such as their structure, atmosphere, dynamics and formation. We then had a series of lectures focusing on the moons orbiting Jovian planets and finished with lectures on exoplanets. 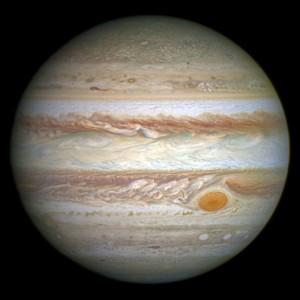 The “Jovian” planets are named after Jupiter, the largest and most obvious example

The assessment was in 3 parts, the first was two mathematical tasks based on the first few lectures. Dr Nichols went through a lot of derivations in the lectures and the assessment was essentially to derive quantities to do with Jovian planets ourselves. This was probably my favourite assessment even though it was difficult, because I enjoy the feeling from managing to solve complex problems.

For the moons section of the course we had a multiple choice test. We had learnt about the formation of craters on moons and the different types as well as what the moons around different Jovian planets are made of. The short test was part calculation and part knowledge. I like the moon Mimas which orbits Saturn because of it’s resemblance to the Death Star from Star Wars (due to the enormous crater on one side) and I’ve been catching up with watching all of the films over the holidays. 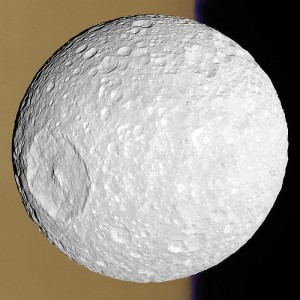 Mimas, one of Saturn’s 62 confirmed moons.

The final assessment for Jovian Planets and Moons was an exoplanet case study (exoplanets are just any planets outside of our solar system but we focused on the Jovian planets orbiting other stars). This was quite a different assessment style to the rest and was to do with plotting graphs of certain data about an exoplanet given to us. This part of the module was also quite mathematical and we learnt about astrometry, microlensing and other processes useful to studying exoplanets.