Hello. I am the new blogger for Physics, I am a second year on the MPhys Physics with Astrophysics course. But, this blog is about my summer and the trips I would not have been able to have gone on without the University of Leicester. I’ve split this into two parts since I’ve had such a jam-packed summer.

My summer started with a trip to Geneva to visit CERN’s Large Hadron Collider. This was a trip organised by PhySoc, our own department’s society organised by students. The trip lasted 4 days in total, so we also had some time to explore the city and go up a mountain in a cable car. 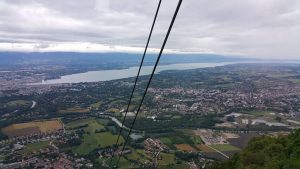 View of Geneva from cable car.

During our exploration of the city we just so happened to bump into some Physicists that work at CERN, they told us about some research they were doing and that they had some evidence to suggest that they had discovered a new particle. They said they didn’t know what it could be but it was very exciting.

The day we visited CERN we had a lecture teaching us about the LHC, the discovery of the Higgs boson and again this mysterious blip their data suggesting a new particle. After this we went to visit the LHC. In true James Bond fashion our instructor used a retinal scanner to open the doors to the lift where we went 100m underground to CMS.  It was a really interesting experience, however, we were not allowed through the doors which led to the magnificent detector since they said it was currently in use and therefore would kill us. 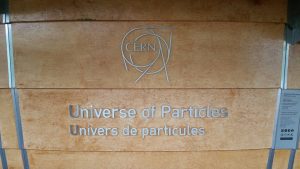 Later in the Summer, after I had completed my summer programme in South Korea (I will talk more about this in my next blog), I found out CERN had confirmed that this blip in their data was unfortunately not a new particle but most probably due to background noise. You can read more about this here. As much as it would have been more exciting if they were to have found a new particle, I still found it really interesting to see science in progress and to have followed this story to fruition.

Standard Model fridge magnets and now I’m looking forward to the next PhySoc trip and hopefully for CERN’s next discovery to be the graviton.

“If you thought that science was certain – well, that is just an error on your part.”

One response to “CERN, Seoul and the Summer of a Physics Student: Part 1”