In my last blog I talked about what I got up to in the first half of my summer and now it’s time to tell you about the second half.

So, after returning from Geneva I had a busy few weeks ahead of me as I had to move out of student accommodation, go back to Leeds to pack and then go down to Heathrow to catch a plane to South Korea. Why was I going to South Korea? Well, just under a year ago I heard about Summer Programmes to East Asia, an opportunity to go to one of the partner universities our uni has in China, Japan, Taiwan and Korea. I also applied for a competitive scholarship which would pay for my flights. To my surprise not only did I get the scholarship, I also got my tuition for the course and accommodation waived.

Before I could let this all settle in I was in Chung-Ang University, Seoul, ready for a month long stay studying basic Korean language and Korean culture. The language course was interesting, however, I only got as far as the hangul (the Korean alphabet); I’ve never been the best at languages. The culture course: this is what I was really excited about. In only the space of a month I visited so many amazing places and did so many interesting things that I don’t think I will be able to cover it in this blog, so I’ll tell you about my top three places. 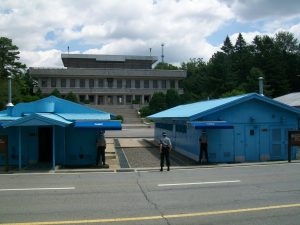 JSA – The very small wall between the two buildings represents the border everything beyond that wall is North Korea.

This was the trip I was looking forward to most. The DMZ (Demilitarized Zone) is a strip of land which runs across the border between North and South Korea. Despite it’s name it is the most militarised area in Korea; full of  armed soldiers, military vehicles and minefields. We passed through the DMZ to an area called the JSA (Joint Security Area); the only place where diplomatic engagements can take place between North and South Korea. It was here, inside a small blue building, that I was allowed to cross into North Korea. It seemed very surreal, but I was allowed to stay in North Korea for five minutes, and only in this one half of a room (the other half of the room was in South Korea). It really underlined the absurdity of the situation and war itself. I learned so much about Korean history that day for more information on this topic click here. 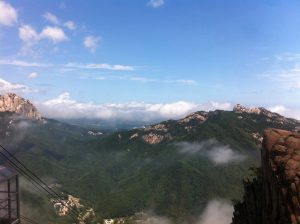 View of Seoraksan from the mountains.

We only spent two days in the Gangwon Province but the countless places we went in that time made it unforgettable. I got to go up another mountain in a cable car, but this time to look down on the beautiful Seoraksan National Park. We also visited the scenic beaches of Gangwon-do to relax and take in the view. The peaceful and tranquil atmosphere seemed to perfectly juxtapose the melee of traffic and myriad of busy crowds of Seoul. That was until one of the Chung-Ang students through me in the sea and we all descended to trying to ensure no student hadn’t been sucessfully sodden in the sea of Japan (or Donghae as it is called in South Korea). 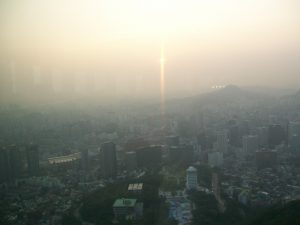 Of course I could not miss out Seoul on this list, it is where I spent most of the month and where I got involved in so many cultural activities from calligraphy to K-Pop. The city itself is very modern but with great respect for its history. The food is amazing whether it be street food in Hongdae or food from Mugyodong Bugeokukjib although the live octopus I was served in Noryangjin fish market was… interesting.  It truly is an amazing city and if you ever visit I would advise you to visit N-Tower where you can get a spectacular view of the whole city.

For more information about these summer programmes please feel free to comment with any questions.

“Science knows no country, because knowledge belongs to humanity, and is the torch which illuminates the world.”