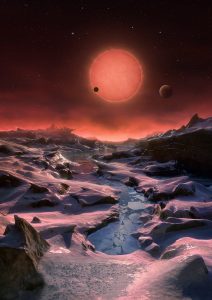 Artist’s impression of the ultra-cool dwarf star TRAPPIST-1 from the surface of one of its planets.

You’ve probably heard it in the news or at least seen Google’s doodle about it: An international team, including space scientists at the University of Leicester, have discovered a system with seven Earth sized planets, just 40 light years away, orbiting around a red dwarf star.

This discovery was made using both ground and space telescopes using what is known as the transit method, where planets are observed as dips in the stars brightness as the planet passes in front (you can learn about this in your third year if you take the Life in the Universe course). Using this method the team  have deciphered the planets radii, loosely determined their masses, and determined that some of the planets may be located in the habitable zone.

Observing 7 planets orbiting around a red dwarf is an amazing discovery, but what about the big question: Could any of them harbour life? To make steps towards understanding the habitability of these planets, what scientists need to do next is point the Hubble telescope at it (or the forth coming James Webb Space Telescope) and study its atmosphere. Dr Nichols, a space scientist at the University of Leicester, who taught me unit 2 Electricity and Magnetism in first year, talked about the habitability of these planets, amongst other things in interview you can see here:

Dr Burleigh an astronomer at the University of Leicester, who has taught me multiple units in first and second year, is a co-author on the Nature paper outlining the discovery. He and one of his PhD students were observing transits across Trappist-1 and obtained results inconsistent with what was expected. This drew attention to Trappist-1; there was something strange going on. The interest in Trappist-1 lead to the discovery of the, in total, 7 planets around the red dwarf. Details of Dr Burleigh’s contributions to the discovery and more details on the discovery itself can be found on his blog: here.

This is a very exciting discovery. It has implications in planetary system formation, planetary habitability and many other fields of interest. Maybe, further research will show deadly solar flares or tidal heating will make life on these planets impossible; maybe based on these observations theorists will come up with a new model of planetary system formation or maybe something completely different. Who know? but in any case: watch this space.

“Scientists are not dependent on the ideas of a single man, but on the combined wisdom of thousands of men, all thinking of the same problem and each doing his little bit to add to the great structure of knowledge which is gradually being erected.”