In first year you start quantum mechanics and from what I can remember you cover the basics of the wave function, and are introduced to some of the quantum weirdness such as quantum tunnelling. The maths used is more difficult than the maths you used in A-level physics, but is certainly manageable.

In second year you use many of the ideas and results from quantum physics to explain things such as: semiconductors in the condensed matter module; and distributions of particle energies in statistical mechanics. The concepts in condensed matter can be a little hard to understand, so I would recommend spending time trying to get your head around what is going on. This is something I don’t think enough students spend time on. I spend a lot of time just slowly reading and rereading through the core texts and lecture slides until it makes sense. Even though sometime you think “I will never understand this” and you spend hours just confused, if you just keep trying you will understand in the end. All the time you spend confused is not time wasted, because after putting in all that effort your knowledge will be significantly more stable than someone who has just tried to memorise the relevant information. 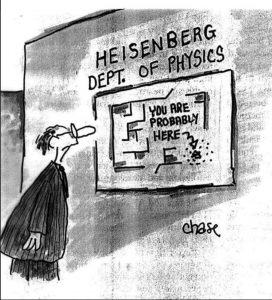 As for the maths, which is harder in statistical mechanics in second year and for quantum mechanics in third year, you are just going to have to practice. I was surprised when I joined uni that so many people who study physics hate maths. I loved maths at school, but many people I talked to either thought it was too hard or too boring. I can understand this; I find Fourier transforms, which I am studying now, to be both hard and boring. However, the reality is, in a physics degree, you will have to do a lot of maths. If you are in a position where you love physics but hate maths, don’t let this reality deter you from doing a physics degree. The reason why I say this is probably worth its own blog (and it may just get one), but in short, just because something is hard or boring, it doesn’t mean it is not worth doing if it is in pursuit of something you are passionate about.

“Those who are not shocked when they first come across quantum theory cannot possibly have understood it.”