At Leicester,  if you’re doing physics, each year you will do Speciality Electives (formerly called option modules), these are non-core modules that cover material in specific parts of physics that you might be more interested in. Each year you will pick 4 (2 per semester), 2 of which have to match the flavour of your course. In first and second year there are no exams in these modules; they are purely course work modules. However, in third year these modules have exams (two in January and two in summer) as well as coursework. 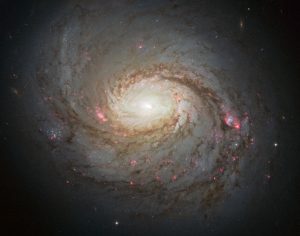 NGC 1068 (Messier 77), one of the first Seyfert galaxies classified (You will learn about the classification of galaxies in this module).

I just finished the lectures for this module and overall I enjoyed it. I am quite fascinated by black holes and hope I can do my third year project on them (more about this next year). In the mean time I’d better start revising because I have the Active galaxy exam in January…

One response to “Active Galaxies”