Posted by Sami in Politics & International Relations on May 11, 2015

So our varsity week was CRAY-ZEE! Super super chaotic and busy, so let me please walk you through one of the most exciting sporting weeks at Leicester.

Setting the scene: UoL Vs DMU, Hockey Varsity
At 11am the walking bus from the student village began. The 80 bus was taken from OSV to Mary Gee. From Mary Gee we picked up more freshers then we all proceeded to walk to our social secretary’s house for varsity brunch. After brunch all off Leicester’s finest (aka all the hockey club) go on a coach to DMU hockey pitches where we all watch the men’s 1st team THRASH the DMU 1st team. Then it’s our round, which all the men stick around to watch. And AGAIN WE THRASH them.. not that I’m competitive! There’s a boom pitch on the side of the pitch, allowing supporters t sing and dance and cheer to their hearts content. Après match time, are several team pictures – which include one of them being sprayed with champagne froth!
At this point ULHC go their separate ways with us going back to our social sec house again to consume food before …

Everyone heads to the Leicester tigers stadium to watch the two rugby teams battle it out (we still won!). But the atmosphere is amazing – nearly everyone turns up to watch from UoL and DMU and I think it must be what Americain University football games are like. After this we return to our social secs house to begin/continue –(but shh because there is no way that alcohol would have been being consumed since brunch..)- our pre-drinks. At which point everyone continues on out to the classic Wednesday night Letsdisko which could possibly have been one of the best nights so far this year!

Then I had a few days for recovery before ROWING VARSITY. The Novice women had these little white visor’s with our names on the front and “head in the boat’ on the back and we looked totally united! The reason we had head in the boat on the back was because when we train all of us always get distracted by things going on in other boats or on the side of the canal (or sometimes in the canal like ducks), so our cox would always be shouting ‘HEAD IN THE BOAT GIRLS!’ Unfortunately we didn’t win but all of ULBC went out on a bar crawl in our AIO – all in ones – which are the outfits we wear for rowing in – which was an excellent look. Eventually we also ended up at DMU’s student union club, which was quite an amusing night, and I thoroughly enjoyed it!

THEN FOOTBALL VARSITY is on the following Monday, which unfortunately we did not win, however we more than made up for that at the DMU and UoL after-party at Republic club! Our chanting was far superior to DMU’s, and our dance moves.. HAHA

These were the only 4 events I went to but I know some people who went to as many as they could! (Unfortunately I had an assignment due and had to work on it) It was an amazing week for Leicester Uni and we absolutely trashed them! It all went by so fast and in such a blur but I definitely can’t wait for the one next year! 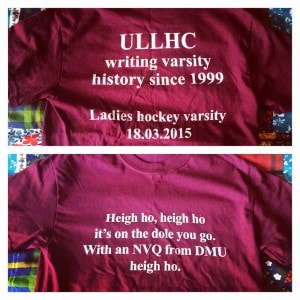