Posted by Oli in Politics & International Relations on October 17, 2017

I don’t even know where to begin with this one. As you’ve probably guessed from the title, we need to talk about gym memberships.     So, I just joined the Badminton club recently, and I don’t think I’ve ever had to swallow as much pain as when I handed over £140 for a […] 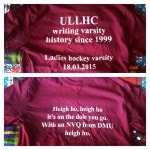 So our varsity week was CRAY-ZEE! Super super chaotic and busy, so let me please walk you through one of the most exciting sporting weeks at Leicester. Setting the scene: UoL Vs DMU, Hockey Varsity At 11am the walking bus from the student village began. The 80 bus was taken from OSV to Mary Gee. […]

Posted by se120 in Politics & International Relations on February 26, 2015

So this week the Leicester Student Union has just finished it’s 2015 Officer Elections; basically this is where the student population vote for who they want to represent them for the next year. Quick background info:

The ‘Gaucho-Dance’ and German Psyche

Posted by Chris in Politics & International Relations on July 17, 2014

It’s been some days since the World Cup winners returned to their homeland and received a well deserved frenetic welcome, which was a Freudentaumel really. The party, though, didn’t go without controversy. Part of the celebrations was a so-called ‘Gaucho-Dance’, in which key players walked heads down singing something akin to “Like this walk Gauchos, […]