Ladies and Gentlemen, Thank You and Goodnight

Last week, I was lucky enough to win tickets to be in the audience of the final ever tour of Calendar Girls at De Montfort Hall on their opening press night. To say it was fabulous was an understatement.

I’m sure many of you will have heard about the Calendar Girls but for those who don’t, let me tell you the story.

Calendar Girls is the story of a group of women from a Women’s Institute (WI) in North Yorkshire, who, in an effort to raise money to buy a sofa for the relatives room of a local hospital, decide to pose nude for a calendar. The idea came about after Annie’s husband John is diagnosed with Non-Hodgkins Lymphoma and she and her friend Chris spend a lot of time in the relatives room. Other women in the WI are against the idea of the calendar but eventually, it ends up attracting lots of attention and they make enough money for an entirely new wing at the hosiptal, as well as the sofa!

The calendar was supposed to reflect a speech that John (played by Joe McGann) was to make at the WI and it is a speech which brought tears to my eyes (until the final line) the first time I heard it, and did the same last Monday.

“The flowers of Yorkshire are like the women of Yorkshire. Every stage of their growth is more beautiful than the last. But the last phase is always the most glorious. Then very quickly, they all go to seed.”

The story of the Calendar Girls was made into a film in 2002 and I remember my mum taking my nan to see it. My Nan is in the WI and where we thought she’d be horrified, she actually loved it. The stage version of the show is mainly set in the WI hall, with some scenes taking place on a nearby hill.

I’ve now seen the show twice and the cast were slightly different this year but that somehow made it more enjoyable to watch. Lisa Riley and Deena Payne (both ex-cast members of Emmerdale), Kevin Sacre (Jake Dean from Hollyoaks) and Camilla Dallerup (from Strictly Come Dancing) were among some of the performers. For me, the most exciting cast change was that of Lynda Bellingham, who took on the role of Chris (Annie’s best friend). She delivered all the lines with perfect comic timing, but when the scenes required it, she and Jan Harvey (who plays Annie) were able to reduce the audience to silence. In a couple of the scenes, particularly the one where John’s diagnosis is revealed and when John’s sunflowers bloom, I and several of those sitting around me were very close to tears. It was incredibly moving. 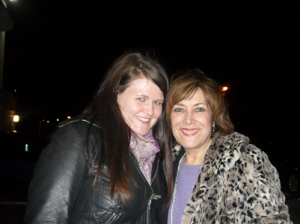 With the fabulous Lynda Bellingham after the show

I was lucky enough to be able to meet some of the cast after the show and got a tea towel, with perhaps my favourite quote from the show on it, signed by those I did meet. (The quote, from when Chris enters a cake she bought at M&S into a WI competition for homebaked cakes and then wins, is: “Calendar Girls advice about baking: Line the Bowl with Butter, Always use a warm spoon and, if it’s a special event, get it at Marks and Spencers”)

If you can’t get to see the stage show (and if you can, I can’t recommend it highly enough) then I’d definitely recommend watching the film.

De Montfort Hall is less than a five minute walk away from the university campus and hosts many productions like Calendar Girls. I’m off to see Anton & Erin (from Strictly Come Dancing) on Saturday Night and the tour of Chicago comes to Leicester in May. There is something for everyone at De Montfort Hall. The Dave Comedy Festival finished last weekend and I went to see The Script there in September 2010. McFly are playing in April and the Summer Sundae Weekender is always fantastic. De Montfort Hall is also the place where I will be graduating from on the 11th July this year. I can’t believe it’s so close already!

Sarah graduated from University in Summer 2012 and is no longer blogging for this site.