Posted by joanna in Psychology on February 17, 2013

So I wish I could write about all the optional modules but unfortunately I only take two this term. Child forensic psychology looks mostly at children’s development of memory and how this affects their ability to be reliable eyewitnesses. We can test infant memory through methods such as object search, which is related to object permanence, a topic covered in second year for psychology students. This is the ability to be aware that an object continues to exist even if it cannot be seen or heard. Piaget found that younger children (<2) would become distressed if their toy was covered with a blanket which he interpreted as meaning that they didn’t understand it is permanent. Here is a link, showing an example of this: http://www.youtube.com/watch?v=cSGWh2CWJnA

Visual recognition tasks are another way of trying to understand memory in young children. These measure whether young children can discriminate visual patterns. Fantz, for instance, placed babies on their backs and measured the amount of time they looked at 3 different stimuli and found a preference  for the one most resembling a human face, suggesting a preference for more complicated visual patterns. Metzoff  found that babies as young as 2 or 3 weeks are very good at reproducing human expressions and this has been interpreted by some as an innate ability for facial imitation. Others, however, have argued these are simply reflexes. 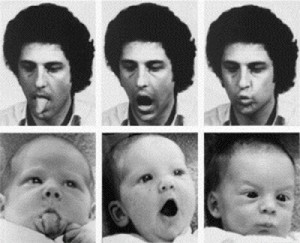 This finding, however has challenged Piaget’s argument that infants can only imitate others at a much later stage in life. Decasper found that babies had a preference to be read ‘Cat in the hat’ by their mothers rather than a new story, if their mothers read ‘Cat in the hat’ out loud to them every day during their final stage of pregnancy, suggesting an incredibly early ability to remember.

All these types of studies have implications for how we understand memory in children. Since covering topics such as these we have looked at differences in memory strategies that are used to intentionally facilitate and improve memory. These are used much more in older children. We have also looked at cognitive and social factors that affect children’s eyewitness testimony. The Salem Witch Trials were the first recorded evidence of child witnesses in court, a time in which children were never thought to lie or be wrong. Here, child witnesses caused many people to receive the death penalty from false accusations. Over time however, researchers have shown how incredibly suggestible children are, prone to making things up rather than saying ‘I don’t know’. This is not intentional, but they forget much quicker than adults and often confuse what they have seen or what they have heard. Social Factors are also very influential, such as compliance to adult authority. By 4, 5 and 6 years old memory is quite accurate but still not as developed as older children.  However, it is important to use children in court, for cases of domestic violence, child abuse, for children who are not victims but have witnessed events and for when children themselves commit crime. Therefore, it is important to see how accurate children’s memory is and how this develops over time to ensure accurate reports in courtrooms.

I have just covered a few areas that I have learnt about so far from lectures on this topic but I hope this gives you a better idea of what areas this module covers:)

Joanna graduated from the University in Summer 2013 and is no longer blogging for this site.