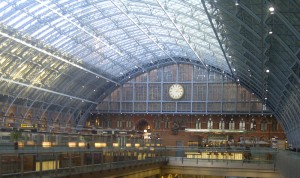 Earlier on today I was in London on business. After my meetings had finished I made my way back to St. Pancras Station using the underground. Just as the train was about to leave, a man, dressed for the cold and brandishing a dirty paper cup, squeezed through the doors. He then told the half-dozen people in the carriage a little about the difficulties he’d been facing and asked if we had any food we could spare – or if we had any change that we could give to him to help him get by.

The simple and effective way he presented his story had clearly affected not just me, but the other five people sat nearby. All of us gave him something – in my case it was the few pennies that I had left in my pocket from my lunchtime sandwich. As the man left the train at the next stop, he individually thanked all six of us again for our kindness.

I’m not sure what it was about this 90 second encounter than compelled me to give something to a complete stranger. There’s no way that I could have known if he was genuinely in need and I can’t even remember exactly what he said that persuaded me to give him something. I’ve had similar things happen to me before on the underground and all that’s happened in the past is that I’ve pretended not to hear while staring intently at the back of my hands. On reflection, perhaps what was even more surprising than me giving him something was that all six of us reached into our pockets simultaneously after hearing his appeal, even though we all knew it was just going to be seconds before he disappeared from all of our lives forever. A combination of what he said, how he said it and his demeanour clearly came together perfectly in that instant. Perhaps he ought to start looking for a job in sales – I know of many sales managers that would be delighted with a success rate less than half that good!

It’s made me think a little about the psychology behind altruism. What is it that motivates us to give to any cause – especially those where there is almost no chance of any tangible return to the giver? It seems to go against the received wisdom of natural selection – the survival of the fittest – for one thing. And if the nastiness of the political debate over the “undeserving poor” in recent months is anything to go by, survival would appear to be at the forefront of many people’s thinking. I’ve lost count of the number of times people have tried to justify their attitudes by arguing that “charity begins at home”. My usual response is to point out that while it might be so, “begin” doesn’t mean the same as “finish”! In my view, being able to empathise with others who are in a less fortunate situation than you are is an essential part of the fabric of a functioning society. Without individuals choosing to operate as part of a wider society in the common good, I doubt that our species would have survived as far as the stone age.

But if I’m honest, I still don’t really know what provoked me and my five other travelling companions into our individual random acts of kindness today.

2 responses to “Random acts of kindness”