Posted by Alice in Psychology on February 13, 2014

Sorry, I know it’s been a while! A friend came to visit me from Brasil, and I’ve been taking her around Leicester and London. In fact, in this post I want to mention one aspect of coming to Leicester that certainly had some weight in my choice of university. Leicester’s geographical position.
It may be nothing for people who don’t really care about travelling around, butI sure do, and living in such a central city gives me the possibility to travel often and – mostly – cheap. I know people who go to Nottingham or Birmingham on a regular basis. But for me, it’s all about London.
I have to travel to London everytime I fly back to Italy, as the airports there have usually the cheapest fares. But even without the necessity of an airport, London has so much to offer, and it’s less than an hour and a half away! And for a person with a pathological tendency to boredom like me, it’s like air. 🙂
For instance, while my friend was here we went to see the celebrations for the Chinese New Year, which are the biggest outside China. There were so many people it was unbelievable, especially close to Chinatown (you don’t say?), and the celebration itself was incredible, with people dressed as Horses (as we’re now in the Year of the Horse), but also as traditional Dragons and Lions. 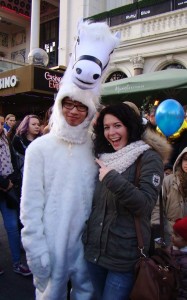 And the lanterns, they were everywhere, and were so pretty! We even got a sunny day, which was pretty amazing! Basically, I loved it and had lots of fun! 🙂 We then went back to London a couple of days later to go to the theatre, and I expect to go back soon. London always feels so…alive!

But for now, my friend’s back to Brasil (I don’t envy her, way too hot for my liking) and I’m back to coursework. Which I should probably focus on, considering my deadlines are approaching!

I’m just gonna leave you a great picture from that day! 新年快樂! 😉

Alice has now graduated. Hi, I'm a Third Year Psychology student and I'm originally from Italy. Nope, I'm not an exchange student, I decided to come to the UK for my whole degree. Wonder why? Well, I hope I'll make you understand a bit more in every post! I love my course, especially the behavioural side of it. Outside uni I play Volleyball, get involved in Volunteering, I am an Ambassador for the University and work for the Student Engagement Team as well. Overall, I try to be as active as I can. I hate being bored!