Laser Tag and Thoughts on Aggression

Posted by Alice in Psychology on February 24, 2015

Speaking of relaxing a little bit, I forgot to mention that we had a small social the other week with the Volleyball Society! This is a busy time for everyone at uni, but we managed to find an afternoon that worked for a small group of people and went out to play…laser tag! 😀

It was so much fun, I had only played once before so I was basically a 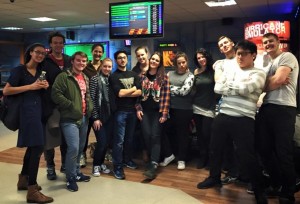 newbie, but it’s so easy to get into it! I kinda want to suggest it to all the societies out there, it’s such a great team building activity, and it doesn’t leave you with bruises (unlike paintball, which is still something we’re thinking of doing though 😉 ). It’s also quite cheap, we got to play two games for around £10, and not that time consuming if you’re looking for something to kill an afternoon. 🙂 It literally only took a couple of hours, right before practice. Well, I leave you to imagine how tired we all were afterwards, but we still managed to train! 😉

Just one last note, as I’d like to make people understand how much my degree influences my opinions on everyday events. As people are split into teams in order to play laser tag, a third team joined us. No problem with that, the more the merrier. Except this team was made up of 5/6 year old kids! One little girl didn’t even understand what was going on, while the others were… even too much into it. Now I have nothing against violent games and videogames, I like them myself and I’ve revised enough material on learned aggression (and wrote a previous post on it last year! to say that it’s not necessarily detrimental to a kid. Research has reported that exposure to violence is unavoidable and without serious consequences, as long as a parent or an adult is there to give provide some context! The kid needs to understand what’s bad about it, and what his/her limitations are in copying such behaviour. But what good does running around shooting strangers in a dark room filled with smoke and loud music to such a small kid?

I was kinda shocked by their age, and didn’t think it was an appropriate activity for them.
Then again, I might be wrong. I’m open to opinions!

Alice has now graduated. Hi, I'm a Third Year Psychology student and I'm originally from Italy. Nope, I'm not an exchange student, I decided to come to the UK for my whole degree. Wonder why? Well, I hope I'll make you understand a bit more in every post! I love my course, especially the behavioural side of it. Outside uni I play Volleyball, get involved in Volunteering, I am an Ambassador for the University and work for the Student Engagement Team as well. Overall, I try to be as active as I can. I hate being bored!