5 things you used to need to survive university

Posted by Tim in Psychology on September 4, 2015

One of the posts that I most enjoyed reading last month was written by Lois, called 5 Things You Actually Need to Survive University. Her advice seems sound to me, so if you’re looking for things that might be useful to you as a fresher you really should go there, rather than carry on reading this.

However, Lois’s post made me feel nostalgic for September 1982, which is when I first went to university. This is my equivalent list of five “must haves” from the era of tightly permed hair, legwarmers and space invader machines. 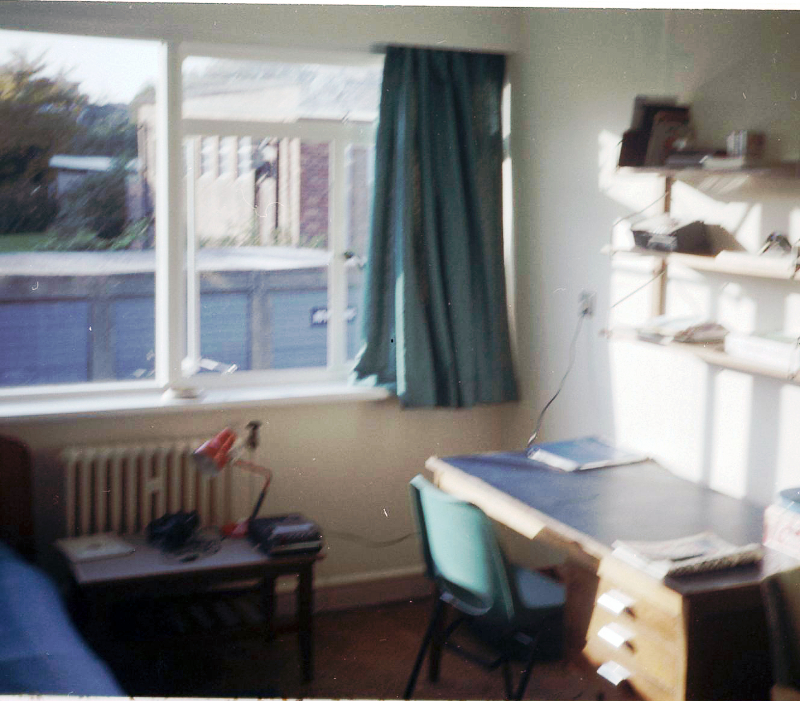 A blurry picture of my room in unversity halls, 1982, before I realised that I definitely needed my black and white tv and record player to survive (you might just be able to see my cassette tape deck by the orange lamp)

Portable black and white television. There was no internet (outside of the computer science labs) so one of these providing access to BBC1, BBC2 and ITV, plus membership of the film society, was essential to satisfy the day to day entertainment needs of the 80s student.

Record player and records. Music was bulky in the 1980s. You needed seriously well-developed muscles to move the stuff around, unless you were fortunate enough to own one of the new-fangled ‘Walkmans’. A (smallish) record player, plus a case of 20 or so LPs was about all that I could fit into my parents’ car after the real essentials had been loaded up.

A stock of phonecards. BT phonecards were revolutionary in the early 1980s as they meant that you didn’t have to carry a large stack of coins (of precisely the right value) around with you to use the hall payphone. Phonecards are long gone of course – the last BT payphone that took them was withdrawn from service in the early 2000s. And even if you had remembered to buy one, you still had to have the patience to queue behind many, many other students to use them.

Alarm clocks. The plural ‘s’ was vitally important to the 80s student, as no alarm clock of the period had more than one alarm you could set. It was worse if you only had a wind-up alarm clock (rather than a nice radio alarm tuned into the university radio station of course) as you had to remember to set them in the 12 hours before you needed to wake up. So having 2 or 3 different alarm clocks was essential, particularly during exam periods.

Coffee. The one thing that unites the 1982 and 2015 student is coffee. Lots of it. I’m still drinking far too much of the stuff now. And even mature, distance learning students like me still need it.

For those of you who have made it to the end of this and are due to start at Leicester in the next few days, welcome. I’m sure you’ll have a great time. Don’t forget to bring your legwarmers …