Did you know that Leicester is currently playing host to Dave’s (yes, as in ‘Dave’ the TV channel) comedy festival, the longest running comedy festival in Europe? How great is that? The festival began on the 3rd of Feb and runs until the 21st, and it has over 700 shows across numerous venues around the city, including The Cookie, Hansom Hall (Just the Tonic), Firebug, De Montfort Hall, Peter’s Pizzeria, and our very own Attenborough Arts Centre! 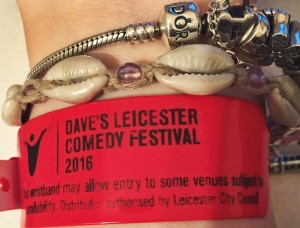 My very worn out festival wristband!

The comedy festival happens every year but this is the first year that I’m actually involved in it (I work behind the bar at one of the venues but I’m not going to say which one so you don’t think I’m here to do a cheeky bit of promotion for them!). As I’m working at the festival I got given a wristband which permits me free entry into most shows, provided they haven’t sold out. Pretty good, huh?

The festival, so far, has been extremely stressful (especially when there’s about 5 shows at the venue in one night!), but it’s also been quite fun; I’m getting to see great shows, meet some comedians (some famous, some not), and getting a glimpse into something that has been a big part of Leicester’s culture for a while now that I’ve never gotten involved in before. I think a lot of people underestimate this festival and don’t see it as a big deal because it’s in Leicester, but it’s quite a unique type of festival, and it’s recognised worldwide. I’ve met volunteers who have come from all over the world just to be a part of the festival!

Although the festival ends on Sunday there are still plenty of shows left, so I urge you to go and see one. Even if it’s not a comedian you’ve ever heard of you might be pleasantly surprised by how good they are (in fact I’m almost certain you will be!). I’ve seen some acts who I’ve never heard of before and they’ve made me laugh, sometimes far more so than the comedians I’ve seen on TV have. Some of the tickets are quite cheap too (5 comedians for a fiver at JTT), and many offer NUS discounts. You’ve got no excuses not to go and see a show really! If you really can’t go this year, I do recommend going along to a show or two next year if you’re in Leicester. I mean, who doesn’t love a great night out and a bit of comedy?

You can visit the festival’s official website here to read about it, see which acts are still left to do shows, and book tickets.