I’ve been a vegetarian for around two years now, and I always knew I’d go vegan (or at least attempt it) one day but I always thought it’d be after uni, because, you know, Dominos and limited money. However, my housemate has been a vegan for a while now and always says how easy it is, so I thought why wait until after I graduate?

I decided to start by making my makeup bag cruelty free (i.e only use products that don’t test on animals). Easy I thought. Wrong. Do you know how difficult it is to find cruelty free cosmetics on the highstreet?! Let me tell ya: it’s hard! I did eventually find out that Superdrug is quite good for this, especially their B. range. I bought all the essentials (for far too much money) from there, and for everything they didn’t have I found a site called ‘beauty without cruelty’.

Next, I moved onto toiletries and was swiftly introduced to the magnificence that is Lush! I had no idea what I was doing in there because, at first, it’s quite overwhelming, so I went in with my already addicted housemate who showed me the ropes. I found a great body scrub that I know I could probably never live without again, and a honey shampoo that makes my hair the softest it’s ever been! The staff are all so knowledgeable and helpful in there, and they even give free samples for you to try so you don’t waste money on products that may not work for you. Seriously, everyone should shop in this place, cruelty free or not! 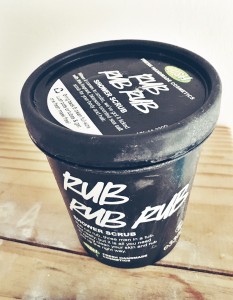 I then moved onto food. Holland and Barrett is another one of those places that is seriously overwhelming when you first go in there, but once you’ve been once with someone who knows what they’re doing it’s great! I was introduced to vegan cheese, which, if I’m totally honest I was really sceptical about but it actually tastes surprisingly good. I didn’t stock up because I didn’t go in knowing what kind of things I wanted, but now I know what I’m doing (and have a loyalty card) I’ll definitely be going back! After we’d done shopping we went for a late lunch at The Cosy Club on Highcross Street (just at the top of Highstreet near Mosh). Inside it looks like it’s been transported straight out of Instagram but the food is amazing, and they have a vegan menu! I had a falafel, hummus, and sun-dried tomato ciabatta, complete with fries and vegan coleslaw. I highly recommend checking this place out (they do meat dishes too, and you can just go in for drinks). 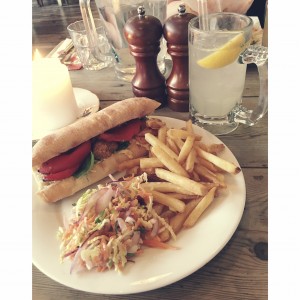 Vegan lunch from The Cosy Club

I’m not saying that I’m 100% committing to being a vegan straight away because I feel like I’d just be setting myself up to fail; it’s going to be a gradual change.  I’m not one to preach or tell people that they must give up meat/animal products because I’m a firm believer in letting people live how they want to live, however, if anyone is thinking about becoming vegetarian/vegan then don’t let being a student put you off because it’s so affordable. Also, I know Leicester isn’t exactly the first place you’d think of if you wanted to live a vegan lifestyle but there’s actually way more options here than you think. Giving up meat/dairy is so much easier to do now, and it’ll only get easier as times continue to change!

Has anyone else become vegan whilst at uni? Or has anyone been one since before? Also, tips will be appreciated, I’m still new to it all 🙂