I’m not sure many of you would have heard about this news because nobody seems to have mentioned it*, but LCFC won the premier league last night for the first time in their 132 year history! Yeahhh!

*that was sarcasm yo

I’m not even going to pretend to be a massive football fan, but as I’ve grown up in Leicester, and as, at the tender age of 11, I won a competition which saw me receive tickets to my first ever football match (LCFC v crystal palace- 1-0 to us) from non-other than Emile Heskey himself, I’ve always had a little bit of love for the Foxes. I’ve been vaguely following them ever since, and have become very invested in their premier league journey this year, so last night I was obviously very happy!

My housemates and I were going to go to the Loaded Dog to watch the Tottenham v Chelsea match last night but decided not to, for some reason, and watched from home instead. We honestly did not think last night was going to be Leicester’s night, considering how terribly Chelsea started off.

We soon changed our tune though; the minute that final whistle blew we jumped up and headed straight to the pub!

On the walk to the pub we were serenaded with the unrelenting sound of car horns beeping and chanting fans walking into town. We had a drink in the pub whilst reveling in the celebrations in there before deciding to head to the city centre, where we stumbled on the ever expanding, impromptu street party by the clock tower. The clock tower was illuminated blue; there were chants, drums played from atop a van, fireworks, police videoing on their phones, people climbing on the clock tower itself, and a football being thrown around within the crowd. We got there pretty early but in no time at all we were surrounded by a chanting, happy sea of blue!

It was incredible to be a part of. 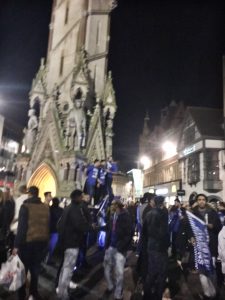 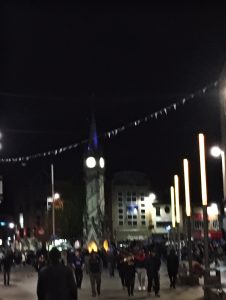 To be honest, for most of my life I’ve been ashamed to tell people I’m from Leicester, but, although my university years were starting to change that, last night completely changed my opinion. I’m officially proud to be from Leicester!