I did it! I’m have officially graduated from the University of Leicester with a Bachelor of Science degree in Psychology (2:1 in case you’re wondering!). I could not be happier!

Graduation day came and went in a bit of a blur if I’m totally honest. The day started with collecting my cap and gown at around 1pm before taking a few (hundred) photos with my family and friends. After that, we made our way to De Montfort Hall where the ceremony would take place. We were all insanely nervous but didn’t know why; we only had to walk on stage, shake the chancellors’ hand and walk off again. I think it’s because such a simple task could become a nightmare if you tripped over your heels or your long gown in front of a huge audience!

Once we were in the hall we were sat in alphabetical order. As I’m towards the end of the alphabet I expected to be sat somewhere right at the back. Nope! I was sitting second row from the front, right in the middle, and I had an empty chair in front of me. I had a great view of everything going on.

Finally, around 40 minutes into the ceremony, it was my turn to go on stage. We were called up in rows and before you even get up on stage they have checked you’re all in the right order at least twice. It’s very efficient! As I slowly made my way up the stairs and watched those few in front of me, the nerves began to disappear and were replaced with excitement and pride. Then it was my turn. My face automatically lit up in a broad smile as my name was called and I made my way across the stage. The Chancellor smiled, offered his congratulations and shook my hand. I thanked him in return. Then I was making my way down the stairs at the other end of the stage (obviously trying very hard not to trip), and, just like that, it was over for me.

It was a weird feeling indeed, knowing that after three years immersed in my studies there was nothing else left to do.

Once the ceremony was over we all made our way outside and met up with friends and family. My friends and I congregated on the grass outside to take the obligatory cap throwing pictures. Looking back on the pictures I think our faces said it all: We made it!

Thanks for a great day (and for the last three years), Leicester. And congrats to all of this years other graduates. Here’s to the class of 2016! 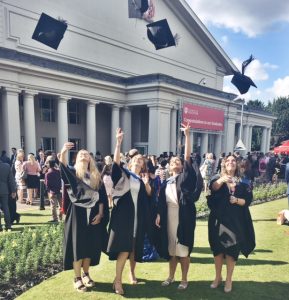