Posted by Tasmin in Psychology on January 17, 2017

As a psychology student I’ve always been fascinated by social interactions, what makes someone likeable? What makes people crack? Now in some way or another I’d argue these notions are explored in depth through each and every series of Big Brother. Whilst I do accept the original concept has become slightly diluted with BBUK housemates becoming increasingly fame-hungry and controversial – the fundamental basis of exploring social narratives still remains. Each year we watch individuals from a vast range of backgrounds come together in a mishmash of culture, values and beliefs, subsequently resulting in an inevitable clash of personalities and moral codes. Every year housemates seem to fill a series of reoccurring roles, we gain an ‘alpha’, a ‘villain’, a ‘mother’ and various other positions often reflective of real life environments. Big Brother allows us to observe how and why these roles are formed and what exactly these roles require.

Big Brother explores the effect paranoia, isolation and various other pressures have on social interactions, through a variety of tasks and procedures. Paranoia for example, is examined via housemates requirement to anonymously express their distaste towards other housemates, pinpointing the specific traits and actions that get under their skin. Subsequently paranoia entails when housemates trust is diminished on learning other housemates may have nominated them, having little to no understanding who did and why. Not only do nominations provide insight into what makes people tick, but it depicts the harmful effect paranoia can have on various social interactions.

If you still don’t believe me that Big Brother is more that just trash TV take a look at Judie James; Big Brother’s Bit on the Sides resident psychologist. Judie gives a weekly rundown and psychological analysis of the houses’ social dynamic, housemates personalities and various other facets of the house.

Henceforth it greatly frustrates me when Big Brother is dismissed as mindless trash, classing it with the likes of Geordie Shore, Ex on the beach and Love Island. Now, don’t get me wrong I occasionally enjoy small doses of trash TV incremental enough to not frazzle my brain completely. But Big Brother is not to be categorised in that genre, and instead should be valued for its social psychological narrative into human behaviour. 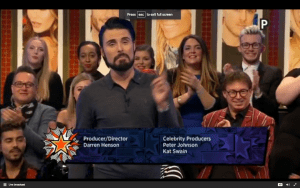 (Here’s a pic of me enjoying myself at Big Brothers Bit on the Side; back row far left)

Hey! I'm Tasmin and I'm from London. For the next year I'll be blogging about my life as a 2nd year Psychology Student. Not only will I be blogging about my course, but also trying to provide a little insight into student life at Leicester, whilst poorly resisting the urge to ramble on about food, films and TV!