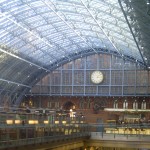 Earlier on today I was in London on business. After my meetings had finished I made my way back to St. Pancras Station using the underground. Just as the train was about to leave, a man, dressed for the cold and brandishing a dirty paper cup, squeezed through the doors. He then told the half-dozen […]

The Occupational Psychology of Open All Hours

One of the more enjoyable television highlights this Christmas was watching David Jason reprise his role as Granville in Still Open All Hours, which aired Boxing Day on BBC One. Open All Hours, with the much-missed Ronnie Barker in the role of Arkwright, the tight-fisted grocer, first appeared on our screens in 1976. Judging by […]

Posted by Alice in Psychology on December 8, 2013

Okay, I have to admit I haven’t been 100% honest with you in my last post. In fact, volunteering and coursework (and Christmas shopping and buying tons of tickets for various trains…) were not the only things that kept me busy during these last weeks before Christmas break. I didn’t mention this during the selection […]

In my first post, I did say that I wasn’t here. Which is still true of course, but last Thursday (14th November) I did manage to make a fleeting visit to the university to listen to a guest lecture by Peter Saville, a celebrated occupational psychologist and entrepreneur. At work, I’ve often found myself involved in […]

Posted by Alice in Psychology on November 8, 2013

Sorry if I haven’t posted in a while, but I’ve been ridiculously busy in the past few days, and I will still be for the next days as well! It’s like everything decided to happen this week! Just hear me out. I had an essay (the one on Gaze Aversion, remember?) due last Wednesday; I […]