We like to sleep all day and party all night

Posted by joanna in Psychology on August 4, 2012

Okay, well not entirely true…but I am awake all throughout the night and asleep during the day. Have just come home from another night-shift as am doing night housekeeping at the Wimbledon Grounds during the Olympics. At first I thought it was going to be horrible and the only real motivation was the money however […] 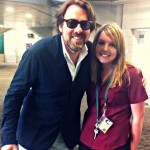 is the biggest highlight of working at Wimbledon Tennis. I have already seen Grace Jones, been a metre away from Nadal and got pictures with Jonathan Ross and the cast of ‘Made in Chelsea’ 😀 Will write a proper blogpost soon when I have a bit more time but in the meantime, I hope you […]

Court attending last week was amaaazing!  Even if I was barely able to walk by the end of it! Had two much needed days off on Friday and Saturday and then started work again on Sunday, as a housekeeper for the Championships. Just got home from a 12 hour shift so pretty tired but I’m […]

So after a lovely few days being home, I am now working for three weeks at the Wimbledon Tennis Qualifying Tournament. Today I had training for my role there as a Court Attendant. I start tomorrow and finish on Thursday (or Friday if there is heavy rain throughout the week). I have been shown how […]