Politics, and why it should be discussed at the dinner table.

I absolutely adore Britain, and all things remotely British – from our history, to little quirks such as tutting, and an uncanny obligation to form orderly queues in all situations, ours is a country defined by (amongst MANY other things) manners and etiquette. However, despite my admiration for the typical Brits’ manners and the rate at which we all strip down to flip-flops and buy Pimms by the crate when a (very rare) patch of blue-sky is spotted, there is one thing which really confuses and frustrates me; the ‘properness’ of our dealing with controversial topics. The age old saying, ‘Don’t discuss politics or religion at the dinner table’ is what I am essentially referring to. As a Sociology student, I am quite partial to a debate, and discussing controversial issues is pretty much the foundation of which my degree was built upon. Now, when I say ‘debate’, I am in no way insinuating a ‘handbags at dawn’ kind of confrontation across the table at Nandos, but an interest in other’s views which differ in some form or shape from your own.

To suggest that the last week has been one of nationwide controversy politically would be a rather large understatement. The elephant which has been sitting in nearly every politically-aware household across the country is the very fierce and very notorious, Ms Thatcher. News of her death has been processed in SO many differing ways that I’ve been having a field-day reading blog posts, Twitter/Facebook feeds and BBC News Reports. However, amongst my researching for reactions to her passing, I stumbled across a few disheartening things. Aside from crude and disrespectful jokes being made of what is essentially a mother, grandmother and friend’s death, I found that there were views being expressed by the (mostly) older generation’s reactions to views and opinions articulated by young folk. Due to Globalisation, we now live in a society where we are connected not only on a national, but international level, and the realms of Twitter is a prime example – it is where I first heard the news of Margaret Thatcher’s death, no doubt alongside the majority of the 8% of Britain’s Tweeters. Of course, the Twitter-sphere erupted within minutes of the news breaking, floods and floods of tweets coming in every second, with each 140 characters long opinion differing greatly from the next. And with the sheer amount of young Tweeters out there, I’m sure it comes as no surprise to you that there were many 18 years and younger people giving their opinion on the matter. This is surely, great news! “Look, our country’s youths are showing a keen interest in, and concern for Politics!” should have been shouted from the rooftops of every exasperated politician, teacher and parent across the country (which is, might I add, currently panicking frantically about the lack of young voters in today’s society).

However, despite many older people commenting on how great it is that they’ve seen the younger generations getting involved, there were also, unfortunately, examples of some very different outlooks on the matter. I was coming across tweets, Facebook status’ and articles published by elders bashing these young folk for, apparently, talking about something they know ‘nothing’ about, since they were not either a) born, or b) an adult, when Thatcherism was sweeping across the country. All due respect to those who did live throughout her time in Parliament and suffered from or advanced from Ms. Thatcher’s policies – you will have your own, personal, true and very in-depth opinions. However, my father loves reading WWII books and takes an avid interest in the treatment of Jewish people during Hitler’s Dictatorship, but I’ve never said “Dad, how old were you when Hitler came to power? You weren’t there? Then you have absolutely no understanding of what went on.” Nor do I think Mr David Starkey would appreciate me telling him he knew nothing about 15th and 16th Century England as he wasn’t actually there. If we applied the latter ideals to Historians and Economists alike, where would we be? History would cease to exist. We wouldn’t learn from previous economical downturns and mistakes. It is important to take recognition and give credit to those who lived through particular events, to continue learning and understand, but it is equally important not to discourage those who look to learn from said elders.

It’s time that we encouraged our youths to take an interest in Politics, and understand that circumstances, such as the death of a very notorious and important figure in our country’s history is cause to get passionate about your opinion, whether you are 13, 27 or 66 years of age. Surely it is time to move aside from our cautious (and very British) ways, and welcome debate and discussion – as, if we didn’t, how would we ever learn? 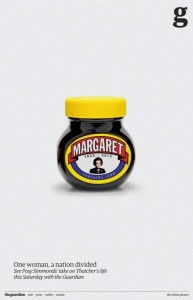 2 responses to “Politics, and why it should be discussed at the dinner table.”