When the surf dies down.

The last few weeks have been a messy affair. All sorts going on, all sorts going off, and all manner of things going down. Well, where to start. Exams were hell on toast and after getting my results back a couple of days ago, I have to admit I’m disappointed. I didn’t flunk, just didn’t get anything like what I was aiming for. That was the moment the surf died. After three weeks of doing very largely my own thing, bouncing between skateboarding sessions, parties and gigs at various locations in and outside of Leicester, sleeping very little, drinking ‘guideline’ amounts of alcoholic intoxicants and generally having a ball, reality kicked in, in the form of an e-mail. This was probably for the best. If I’d got the results I had been pushing myself for I can guarantee that this blog would not have been written…

So while I’m currently four days into a detox programme I figured it’d be cool to recount some of the carnage and debauchery in which I’ve been very actively involved. Obviously I have to be careful here as I’m representing the University of Leicester and as a result am not completely free to recount (in detail) the average post-examinations goings on of a Leicester University student.

Where to start? Well last weekend was the 2013 Download festival at Donnington. I bought my ticket whilst slightly under the influence and while the ticket and travel exceeded £200, I would recommend Download 2014 to any Leicester student with a taste for metal. For one, its about an hours train journey plus half an hour on a coach to the festival site which is handy.  Being the second biggest music festival in the UK it has a tendency to draw in some big names, and when you have big names you attract big crowds, another bonus. In fact the headliners for 2013 were so top draw that some bands, for example, Queens of the Stone Age and Motorhead who are typically headline acts, found themselves slipping down to previously unheard of positions on the billing. However, this made for great headline stage shows, as no headliner wants to be outshone by a band below them on the billing.

While much of my memory from the weekend in question is rather hazy, I do have vivid memories of the weekends headliners, two of which I had seen previously; Iron Maiden and Slipknot. The dinosaurs of British metal, Iron Maiden never disappoint. After beginning their set with a spitfire fly by, thus getting the massive crowd seriously buzzed, the rest of the set never lost its pace or excitement. A customary prop and costume change after almost every number they played kept the hordes of metal heads on their feet and kept the pits bouncing. A truly awesome show, Maiden still have it after over 30 years! Rammstein closed the festival, being the final main stage act on the Sunday. I’ve never really been much of a fan if I’m honest but they put on a very different show with a rather dubious, very European industrial style incorporating some, shall we say, ‘different’ props including a machete microphone and an almost constant barrage of pyrotechnics. Another great show.

You can expect this from any headline act at a festival as large as Download. I’ve been to a fair few music festivals over the years, and one thing that has always amazed me is the way less well known bands who generally play in the various tents dotted around festival sites can end up becoming the best thing you saw all weekend. Download 2013, with its hugely popular main stage acts, was no exception. Whilst carrying out my pre-fest research, something I’ve never done before, I stumbled upon an L.A based group called Fidlar. They were billed to play the Red Bull Stage on the Friday. They played late quite on, and after stumbling through the crowds trying to find the correct tent I found that I’d arrived some forty minutes early, so I took a power nap right there in the Red Bull tent. I awoke to the sound of Fidlar sound checking and got myself positioned right in the danger zone, towards the centre front being careful not to get to close to the railings. The energy emanating from this four piece was incredible. A non-stop, no bs set that sounded almost alien to every other band I experienced over the course of the weekend. To listen to one half of their 2011 e.p DIYDUI follow the link.

So, while the quality of music was second to none in my opinion, the Download festival does suffer a little due to its sheer size. The walk to the main arena from our campsite took forever and we were located in one of the campsites considered to be close to the main arena. Having had very little rain over the weekend we were lucky. I would hate to imagine walking such distances in a wash out Download. Also, and this is the case for many of the larger British festivals, the price of beer and food is unbelievable, especially on a student budget. £4.50 a pint in the main arena and a whopping £42 for a slab of 24 cans. But if you think that’s bad the food is even more overpriced. Festivals, in my experience have always been like this, but it’s starting to get ridiculous now, considering the ticket prices also go up year on year. There are obviously money saving tactics, for example take cooking equipment and your own food, along with your own beer etc. this is obviously awkward but well worth it to save a fair few quid. Before doing this however you should be aware of the campsite rules. Camping gas and glass bottles are banned almost universally from festivals and while I understand the logic behind the glass bottle ban, the restrictions placed upon camping gas does ponder to the rip-off merchant food wagons. I take gas, always have, you just have to be sensible with it. Like don’t throw empty (or full) canisters on open fires, because that’s what tins of beans are for.

All in all the weekend was absolutely brilliant. It was good to go rock out festival style after not making a major Brittish festival since Sonnisphere 2011. While the idea of camping in filth with a load of greasy metal heads is not for everyone you should try it once at least, there is absolutely no beating the feeling of being a part of something so big with so much energy and atmosphere; a real experience.

I don’t usually put pictures on my blog posts but this time I thought why the hell not. Enjoy, and if you’re considering some festival action this summer remember, know your limits, make yourself aware of rules, take wet wipes, don’t fall asleep around your mates but most importantly have fun. Oh yeah, another massive thank you to my pal Eve for supplying me with a tent, sleeping bag and roll mats. Cheers buddy! 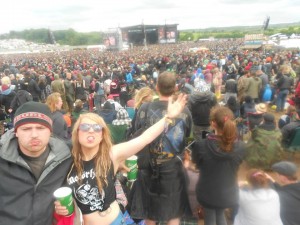 Bevan has now graduated from the University of Leicester.