Understanding Feminism in the 21st Century.

I am a Feminist. I am not radical, nor am I a man-hating, matriarchal-wanting crazed lady wandering the streets of England ranting about the glass-ceiling and baring unshaven legs. Yet, (usually) when I tell someone I class myself to be pro-women’s rights, I can see the latter description of a Feminist flash across their face, and with indignation am usually told that we ‘don’t need’ Feminism in today’s society and that everyone is ‘equal’. However no-one stops to consider that just because I am pro-women’s rights, I could possibly also have strong views on equality for men, for example, within the likes of childcare and divorce settlements; I would argue for a father’s right of custody of his child in particular cases just as vehemently as I would argue for equal pay, and the right for women to be able to be in control of her body and contraception. Feminism, to me, is the up-hill struggle which has been carried throughout history by like-minded women to reach a penultimate goal of equality – never to surpass or oppress men, but to live beside them in the work place, the home and all other sectors without prejudices.

“But, we’ve already achieved equal opportunities and rights. Feminism succeeded, we don’t need it anymore, there’s nothing left to fight,” I can imagine a select few might argue, and it is due to that fact that we should be more vocal about exactly what Feminism is. It’s not a fight against the genders, Feminism in today’s modern age isn’t even just the success of winning the vote for women – it’s evolved and moulded to fit and challenge problems women are faced with every day in this world, merely due to the fact they were born female. With reports of young female students being gang-raped and dying of their injuries, ‘slut-shaming’ victims of rape due to the fact they were ‘flaunting’ their bodies, figures from the Report for Women’s Conference (2012) showing that women are less likely than men to occupy higher-paid managerial and professional jobs, and the shocking fact that there is even a need for organisations such as ‘Change.org’ to campaign against sexist and often derogatory advertisements towards women, Dr Pepper being its most recent target, it would be crazy to suggest there is no place for Feminism in today’s society.

Feminism isn’t even strictly about being female – I know lots of great, very masculine, rugby-playing and tough men who would be outraged knowing their daughter/wife/friend/whomever was being discriminated against in the workplace for something as simple as their gender. Similarly, you can never be too far from reports of women in the media ‘fat-shaming’ and writing cruel articles on female celebs for anything from their weight to their dress-sense. Just last year, a female Daily Mail reporter targeted the lovely Holly Willoughby in an article, stating her to be ‘anti-feminist’ for posting a make-up free snap of herself on Twitter when she ‘appears on TV with eyelashes so long they probably contribute to the El Nino effect and lips so red and plumptious she resembles a drag queen.’ Believing a person is anti-feminist because she *shock horror* wears make-up goes against everything the modern day Feminist stands for! The latter is something I have an extreme disliking for; it is beyond me that women who must have fought tooth and nail to reach such heights in their careers (journalists, magazine editors, etc) would then try to shame other women for their appearance, rather than the character of their personality, because sadly, they know that such trash sells. We are more concerned on whether Cheryl Cole has gained weight, than reporting on the amazing and inspiring women of the world who make a real difference.

Something which inspired this particular post of mine is the recent political uproar which is currently taking place in Texas, America and caused chaos on social networking within moments of the event, with #StandWithWendy trending world-wide on Twitter. Senator Wendy Davis stood against a bill in Texas which stated that abortion after 20 weeks of pregnancy should be made illegal, thus, disturbing and causing difficulties for abortion centres across the State. Governor Rick Perry said that if the bill ‘makes it to his desk, he will sign it.’ Wendy Davis ‘filibustered’ the bill, which meant she had to talk on the subject at 11:18 in the morning until 11:59 at night so that the bill would not reach Governor Perry. This bloomin’ brilliant woman was not allowed to pause for even a moment, go to the toilet, eat, drink, nothing, or all of her efforts would be lost. And she won – the bill did not pass! And not only did this amazing, bright and courageous woman stand for the rights of the women of Texas to stop the shocking bill, she did it all whilst wearing neon pink Nike tennis shoes. How’s that for Feminism, folks?! 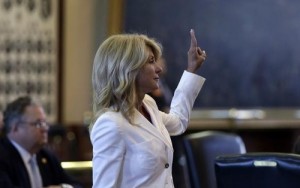 “We begin to find and become ourselves when we notice how we are already found, already truly, entirely, wildly, messily, marvellously who we were born to be.” – Anne Lamott.

http://www.change.org/petitions/drpepper-stop-the-sexist-campaigns (In case anyone was curious about ‘Change.org’.)

http://www.bbc.co.uk/news/world-us-canada-23058736 (I do not pretend to understand American politics, at all, so if you would like a deeper look into Wendy Davis’ amazing feats, follow the link.)

2 responses to “Understanding Feminism in the 21st Century.”