We each have our little quirks and interests, things which really captivate our imaginations and come to almost define who we are as a person – this all-encompassing kind of love of a topic or theme, from football to Pythagoras theorem, becomes almost definitive to who we are. One of my many, but arguably my most endeared of these interests, is history, most specifically, medieval British history. I absolutely adore learning about the topic and spend hours divulging over books on anything from the War of the Roses, to whether or not Anne Boleyn was guilty of the charges against her, ultimately leading to her execution.

So, as you can imagine, when the chance to visit Warwick Castle arised one dreary weekend last month, I jumped at the chance! And it was absolutely breath-taking. Not only was the castle still very much intact since the development  of the original structure built in 1068 by King William the Conqueror, but the history it held within its walls was astonishing. From the outside, the castle looked impeccably foreboding – you could see where there had once been arrowsmen and canons positioned at the top of the infrastructure, and the moat surrounding the castle led to a local river, which ran quite ferociously around the side of the castle. But once you stepped over the bridge from the outside and wandered into the courtyard of this phenomenal building, you really could be forgiven for thinking you had stepped through a time portal (minus the tourists and the flash of neon trainers wondering about). People dressed in medieval costumes and signs looking as though they have always stood in place dotted about on the open green, with the dungeons and goals to one side, and ‘Princess Towers’ and Victorian entrances to the Great Hall standing before you. 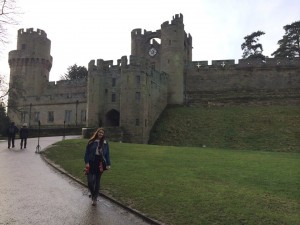 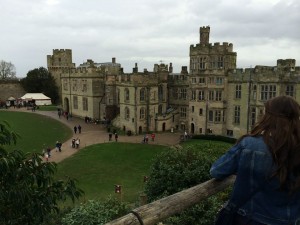 The Castle, after being sold to the Tussauds Group in 1978, was previously owned by the Greville family, who became Earls of Warwick in 1759. Prior to their ownership, the Castle had fallen into the hands of the infamous Tudors, who left the castle to rot after their defeat over the Wars of the Roses. However, Warwick Castle is probably MOST famous for its part to play during the mid 15th Century, when it was held by Richard Neville, who famously went against King Edward IV, and had a daughter, Anne, who went on to marry Leicester’s very own Richard III. There was a huge chunk of the castle dedicated to this era, with disturbingly real looking wax figures at work or resting in the ladies’ room, whilst sounds and smells which would’ve drifted through the castle wafted about the rooms. I was probably a slight embarrassment to be with during this part of my trip, since I was running back and forth, taking it all in with what could only be described as sheer joy on my face. It was, for me, like being in a historical Disney land. 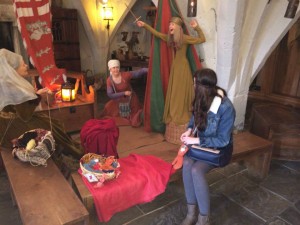 From there, I ventured into the more ‘Victorian’ section of the castle, and poured over priceless antiques, whilst following a tour ‘The Ghosts of Warwick’ by a man who was fantastic and very charismatic! By this time, the weather had taken a rather grim turn and so, as you could imagine, any activity on the inside of the castle was over crowded. Still, it was incredibly interesting and I really enjoyed getting into the swing of Victorian life (whilst pretending I was an extra on Downton Abbey, of course). 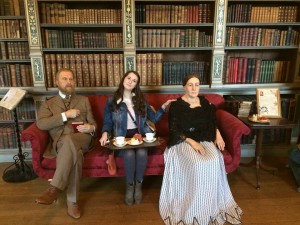 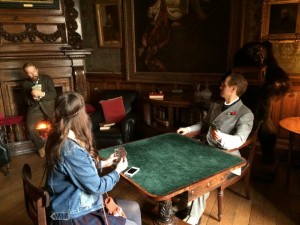 However, aside from the beautiful grounds and the incredible history, I must admit my possible favourite part of the day was entering the dungeons! It was suitably scary and there was a significant amount of tension built up before my group entered, thanks to the handy work of the dungeon’s ‘fool’. Upon entering, I was blown away (almost literally) by the stink of the place – they must emit some kind of foul smells for effect – and the dank and darkness of the halls we walked through. From there, I entered rooms on everything from the black death and executions, to witchcraft and a courtroom! Yet, the most ‘effective’ part of the tour was undoubtedly my experience in the butchering room (also focused upon the bubonic plague), whether I was unwittingly selected by the demon butcher to undergo his treatment as he sensed I was full of “bad meat” *gag*. After being nudged forwards by the crowd, he sat me on a blood stained stool and pretended to hammer in my head and slit my throat whilst pulling out my insides… There were sound effects of screaming whilst the brilliant actor was doing so, but they were not needed – I left that particular room with shaking hands and a hoarse throat!

So, it is without a doubt that I recommend to any fellow history lovers, or even anyone just looking for an enjoyable day out, Warwick Castle is the perfect place to go. As an avid castle visitor, I have to say Warwick was so far, my favourite, and I fully intend to revisit once the weather is slightly brighter, as they hold tournaments on their gorgeous greens and I am SO up for bagging me a Knight! 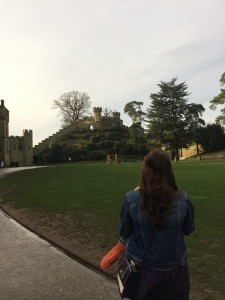