Following on from my previous blog about my first day in Amsterdam, here is what I got up to on day 2!

We got ourselves up early (by early I mean the student version of early…about 8.30) and the first thing we did was fill ourselves up with breakfast. The hostel price included breakfast and there was a lovely continental buffet laid out for us, including cereal, fruit, boiled eggs, cheese, ham and loads of types of bread (including Dutch toast which is sooo good…it’s sort of crispy bread…bit like French toast. Anyway, it goes well with cheese!). Once we were suitably full we headed for the tram to get into the city.

We began the day by looking around the Amsterdam Museum. This was a great experience! It outlines the history of Amsterdam, with reference to geographical facts, the role the city played in wars and how the political organisation of the city has changed over time. Often museums can get quite tiring and boring to look around but this was made more interesting by being interactive. At various points around the tour you can scan your booklet to watch a video which is a great way to learn rather than just through reading. The best part was the carpet at the end which is made out of different patterned patches to represent the 200-odd nationalities who reside in Amsterdam. It is an absolutely stunning piece of art! 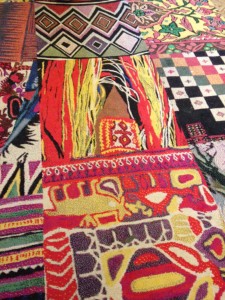 We then decided to go on one of the free walking tours (when they say free they hope that you provide them with a tip at the end. Which I hope everybody does because it was a really great tour) so that we could put the beautiful sites we had seen into context. We learnt so much from this, for example that the Magna Plaza shopping centre used to be a post office (which really shocked me!) and that there are specific places in which graffiti is legal. I mentioned seeing one of these places in the first part of my blog and it really is amazing. The graffiti is a form of art which represents the political and social struggle of the lower classes who were frequently cut off from society. Take a look at this picture and you’ll see what I mean when I say its art… 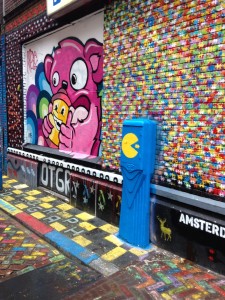 The tour also took us through the Red Light District, which is worth a look at day time, although I wouldn’t say it’s necessary! It is a weird feeling to be walking down streets with brothels either side when you’re not used to it! But from a sociological point of view (especially because I am currently doing a module on The Global Sex Trade), it was a great chance to visualise what I have learnt.

Because we had been walking around for a good few hours we decided to give our feet a rest and find somewhere to sit down and have lunch. We found this tiny pizza take-away/café place. We decided to go here because whilst we were looking at the menu a customer came out and told us it was very good!. And it was indeed very good! They made the pizza and cooked it in a pizza oven right in front of us and we sat looking out at a canal, what more could you ask for!

Because we were quite cold we searched around for a hot chocolate and found one in a waffle place owned by a husband and wife. We asked for 4 hot chocolates and what they gave us was some cups of boiled milk which they then stuck a stick of dark chocolate into. I thought this was genius! It was so tasty!

We then wanted to see the Van Gogh museum which meant hopping on a tram for 10 minutes. We got off and there was the I Amsterdam sign, which I had forgotten existed! We fussed around taking pictures on the sign, but you can never get a picture which fits the whole thing in because it’s too long! So we settled for taking pictures with just a couple of the letters. 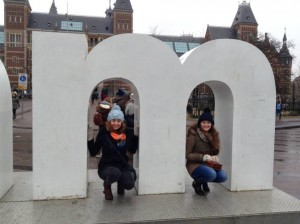 I have to mention the toilet doors simply because they amazed me. Me and my friend when to the ladies (for your information they are the toilets near the I Amsterdam sign) and were shocked to find that the cubicle doors were made of glass- see through glass. So I nervously went in, thinking that everybody was going to see me take a leak, but as I turned the lock on the door the glass misted up! I’d never seen such a thing. Anyway…unfortunately we were too late to look round the Van Gogh museum (this gives me an excuse to go back!). But this was made up for when we had dinner, which again was absolutely superb. Because we weren’t quite ready to say goodbye to the city we decided to take a visit to a piano bar which we had heard about through the hostel. This was a really lovely little place where we enjoyed a couple of drinks (however a vodka and lemonade did cost 9.50 which I didn’t realise until I had already ordered 2…oops!). Nonetheless, it was a great way wind down after a long day of exploring. Unfortunately it did mark the end of our trip to Amsterdam as the next morning we were making our way onto the coach for our 12 hour journey home. It was sad to leave the city but we all felt like we really had made the most of our time there. It really is a remarkable place and I highly recommend visiting it if you have a spare few days.

I am Olivia and I study sociology. I am originally from Southampton but now live in the beautiful countryside of Norfolk. As well as being sociologically based my blogs will often surround topics such as the music industry, life as an identical twin and my life here at university.