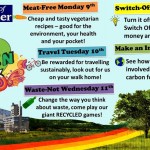 Get involved with Go Green Week!

Posted by Olivia W in Sociology on February 4, 2015

As part of the Leicester Award and Environmental Action Society I am taking part in the Go Green Week project which is running from the 9th-13th February at the university. The point in this week is to try to change the way that students (and staff) think about the issues surrounding sustainability. This has involved […]

Richard III and the Justin Bieber have a lot in common!

Posted by Amy-Rose in Sociology on February 6, 2013

Campus has been a place of complete euphoria for the last few days and there is, undoubtedly, one King-shaped cause – the discovery, courtesy of some very hardworking folk at the University of Leicester, of King Richard III remains. Despite the infamous King ruling for a mere two years, he is recognised as one of […]