Exactly one month after the end of exams and my second year in Leicester, I finally arrived in Christchurch – or the city that rocks as its known here and my new home for the next year as a third year geology exchange student. I’m already ranking it up there with my favourite places even if it is still my first week here. I mean there’s so much rebuilding going on, most people are super friendly, the views are epic and they sell the biggest bags of Freddos I’ve ever seen! 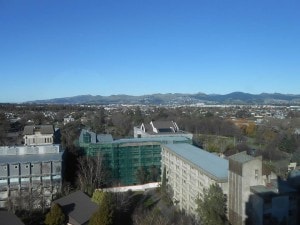 Here’s the view from the library – can see the building work still going on and just about make out the Port Hills in the background.

Anyway, I thought where better to start my blogs than right at the beginning by telling you a little bit about my journey here and the uni itself. It took a whole two days from the U.K… Or England as everyone here calls it – they seem to have forgotten about Scotland, Ireland and most importantly Wales (I mean who makes up the majority of the Lions team anyway?!). I first jetted off from Heathrow, then Dubai, followed by Melbourne and Auckland.

In Auckland I had to get my visa stamped, along with going through New Zealand’s strict bio-security checks. Had to declare my walking boots and have them checked. All regular stuff but super scary when you’re on your own and not really knowing what day it is, let alone what’s going on! After Auckland the next stop was Christchurch, where I headed to my final destination – the University of Canterbury.

So, a bit about the uni… it’s a campus so I can pretty much roll out of bed and into lectures; though I haven’t had to too many times so far. The nightlife’s not quite up to Leicester’s standards. I’m already missing my weekly outing to Red Leicester! On the upside at least being on site I don’t have that dreaded bendy bus journey from the halls in Oadby to uni like in first year. 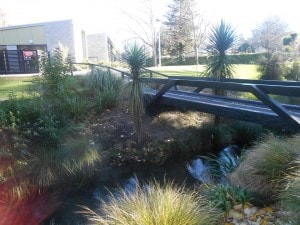 One of the many bridges crossing one of the rivers on campus!

I’d say the campus is probably a bit bigger than Leicester and like Leicester has its fair share of ugly concrete buildings, at least there’s a tonne of plants, bridges and  rivers to make it look pretty!

If you fancy a quick look at the campus here’s a link to the UC campus video:

The uni is also in a pretty good location, less than an hour from the Port Hills and New Brighton beach so there’s plenty  to do! It’s also 20 minutes or so  from the city centre which isn’t too bad especially considering you pay $2.30 (£1.15ish) for a return – super cheap. The downside though is that there’s not that much to do in the centre itself as it’s all still pretty empty but I’ll blog more about that next time…

3 responses to “Welcome to the city that rocks!”