It’s a been a fairly hectic first 3 weeks and I still haven’t properly blogged about half of the exciting things I’ve done, apart from visiting the city centre! So this week I thought I’d give you a bit of an idea about what I’ve been up to… 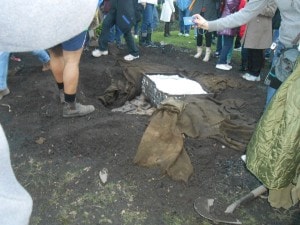 This is the hangi in the ground before the Maori men took it out for us to eat!

Maori cultural night: There were so many chances to experience Maori culture in international welcome week but this was probably my favourite night. We had a hangi, which is when the Maori men dig a hole in the ground, fill it with hot stones, place food in baskets and then cover it all up with soil and let it cook for a few hours. The New Zealand lamb tasted sooo good!

Christchurch beaches: There’s a tonne of pretty beaches here – New Brighton, Waimairi and Sumner (although admittedly New Brighton could just have easily have been anywhere in Britain). Sumner’s my favourite! The tide goes out so far there, so you can look in all the rocks pools searching for starfish and crabs… and for anyone that cares, I even saw some crazily cool anti dunes there the other day! 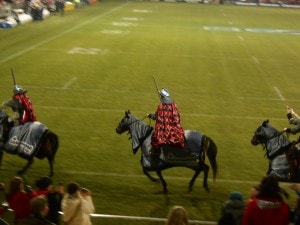 These were some of the horses and knights that came on the pitch before the Crusaders started the game – nothing like this back home!

Crusaders game: Well, it wouldn’t be a trip to New Zealand without watching a few rugby games would it? I went to see the Crusaders play against the Hurricanes in the AMI stadium (even got to see Dan Carter play!) and it’s safe to say they didn’t disappoint. They won the match and their cheer horses and cheer knights (if that’s what you call them) were definitely a highlight.

Port Hills and Lyttleton: A group of us went tramping (New Zealand’s word for hiking) up the Port Hills over into Lyttleton – the prettiest little place ever! It literally looks like something you’d imagine out of Lord of the Rings. They were probably the best views I’ve seen so far in Christchurch even if it was foggy up the top. I’ll definitely be making a visit there again on a clearer day! 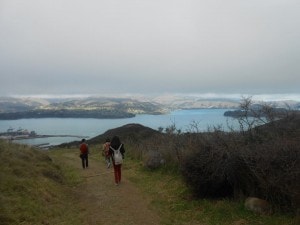 Even with the low clouds over the Port Hills, you can just about make out the amazing views looking down over Lyttleton and the harbour!

All that regular uni stuff: We had refreshers last week too so there was all sorts going on – a hypnotist show, royal baby party, geology pirate quiz, flat parties, world record breaking speed dating, winter markets (I know, it’s crazy to think when Britain’s having a heatwave, we’re having a winter market – everything’s so upside down and back to front here!)

…and finally, we had a real earthquake! A load of them hit central New Zealand, shaking Wellington the worst. We felt the biggest one (a magnitude 6.5) here a tiny, tiny bit – my door started moving and squeaking on its own and one of my flatmates came running, saying the floor was moving. Now that really was crazy stuff!